Local thrifts stores are asking residents not to make donations overnight
Jul 12, 2021 9:30 AM By: Robynne Henry 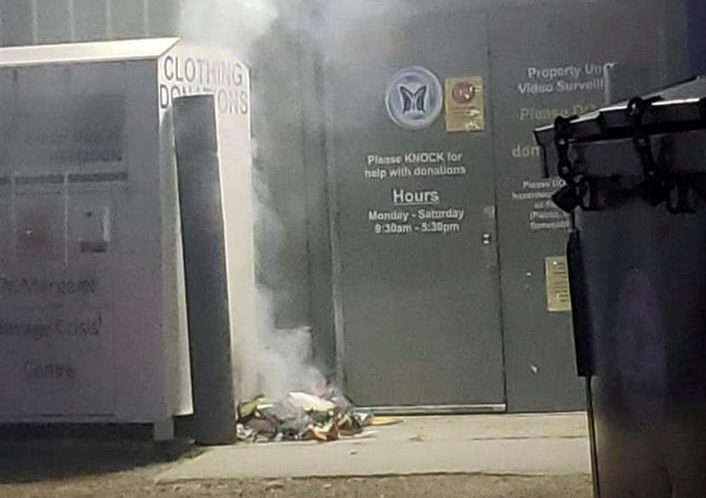 Orbiting Trends in Cold Lake had some donations that were left overnight set on fire in June. Photo submitted. File photo.

Cold Lake – "All we ask is that the community put that same amount of value on the items they donate as we do so that they know it gets here safely.”

Dawn Weber, social enterprise coordinator for the Dr. Margaret Savage Crisis Centre (DMSCC), stressed the importance of people looking to donate items to either Orbiting Trends or Ella’s Closet to not do so overnight.

According to Weber, the thrift stores in Cold Lake have clothing or other items left on their doorstep overnight too many times to count in the spring and summer months.

Typically, whatever is left outside is either affected by the elements or rummaged through and stolen. However, there was an instance that could have been ‘catastrophic’ to the DMSCC.

In the early hours of June 19, members of the Cold Lake Watchdog Security team were in the downtown area when they noticed smoke and were led to a fire behind Orbiting Trends.

“What it looked like is someone had dropped off books as a donation, left them outside the door, and then someone came along and lit the books on fire,” detailed Weber, adding a member of the security team called the fire department.

“They proceeded to sweep the books that were on fire away from the building until the fire department arrived moments later and extinguished the flames. We are really thankful that the City of Cold Lake has contracted this private security company to look out for our downtown businesses in this way. The outcome of this fire could have been catastrophic for our building and our charity had they not responded and acted so quickly.”

There was no damage done to the building, but the side of Orbiting Trends’ donation bin does have some damage from the fire.

Weber stated this is the first incident with fire that they’ve had to deal with but isn’t the first time people have interfered with donations left for them overnight.

“Normally, if donations are left in the evening after we’ve closed, I would say it’s a 99 per cent chance that they won’t be intact by morning. It’s not just the elements and weather that’s an issue, it’s that people come and take from them,” she explained. “We do have an issue in Cold Lake with vagrancy, it’s well known and that contributes to the issue but it’s not just vagrancy. We also have seen in our security cameras that people pull up to donate and then they pick what they want that’s sitting there and leave their stuff. It’s not just the vagrancy, it’s also average community members that you wouldn’t suspect that are taking things that don’t belong to them.”

According to Kokum’s Corner Manager Zane Thain, they’ve also had some issues with fires around their facility.

When donations Kokum’s Corner received also got rooted through during the evening, Thain said they put up signs requesting people wait until they’re opened to drop anything off.

“We put two big signs up and now they don’t do it. They bring them when we’re open or they phone and we pick them up.”

The Bonnyville Bargain Boutique has also had some issues with people wrecking their donations. They found their own temporary solution for the problem.

The Bonnyville thrift store previously had a donation bin outside of their building for a time, stated manager Amberly Gooler, and had very few issues with donations being left overnight and damaged. But, there were instances before they got the bin where employees came in for their shifts and saw items wrecked when they were left outside.

“In the past, we have had people defecate on them, like actual human poop, and we’ve had animals and human urine. We usually glove up and everything goes into the dumpster because it's biohazardous to even attempt to bring anything in.”

Gooler added, “We’ve also had things scattered across parking lots. A lot of the time the neighbouring building, their staff entrance is a little alcove and they’ve actually had stuff piled and soiled in their entrance as well. We’ve had to go over and clean up that mess from people going through everything. But, anything we have that’s left outside, unless it looks like it’s been left outside without being touched early in the morning before we come in, then we’ll have a look and bring it in. But, most times, it’s just not worth our safety to go through anything so we just toss it.”

Weber encouraged anyone considering making a donation to a local thrift store to “place a lot of value on the items that are donated because they mean so much to us as the crisis centre, because they help us work towards our fundraising efforts and also provide for the women in the shelter.”

Orbiting Trends, Ella’s Closet, Kokum’s Corner, and the Bonnyville Bargain Boutique all have flexible openings for when people can make donations and some don’t require an appointment to do so.