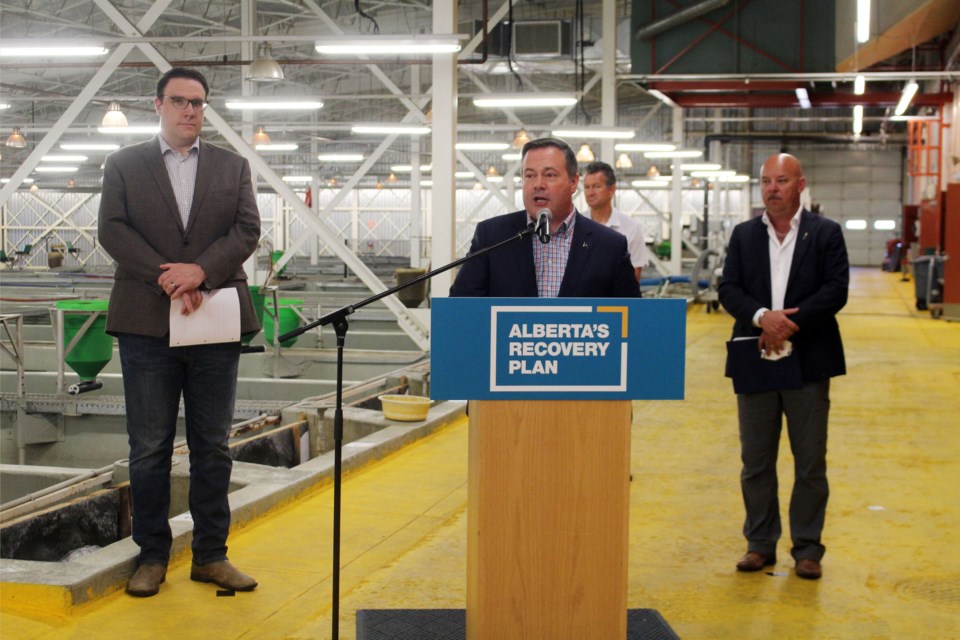 Alberta’s Premier Jason Kenney announced on Aug. 6 that a total of $10.3-million will be invested into the Cold Lake Fish Hatchery. Photo by Robynne Henry.

COLD LAKE – The Cold Lake Fish Hatchery is receiving a boost from the provincial government.

Alberta Premier Jason Kenney made a stop at the local hatchery on Aug. 6 during a tour of the region, to announce the facility will receive a total of $10.3-million for upgrades, including the construction of a new recirculating aquaculture system.

“These upgrades will improve the facility's cost efficiency and help it to meet the high biosecurity standards, all while supporting Alberta’s economic recovery,” he said. “They’ll also create, we estimate, 40 jobs in engineering, project management, and construction.”

The construction of the recirculating aquaculture system will be funded from Environment and Parks for $7-million. An additional $3.3-million from Alberta Infrastructure will go toward the installation of a new oxygen generator and replacing the hatchery’s water headbox, metal roof, and motor control systems.

Craig Copeland, Cold Lake mayor and manager of the hatchery’s fish stocking and zebra mussel prevention programs, stressed the importance of the investment.

“It’s really fantastic the province is starting to put some serious money into the hatcheries,” he exclaimed. “Just picture your own house; if you don’t replace the roof, you’ve got a serious problem.”

The Cold Lake Fish Hatchery produces around 840,000 trout per year, including rainbow, brown, tiger, and brook.

According to the province, the project is part of the more than $10-billion slated for infrastructure spending in Alberta's recovery plan.

Kenney said it's the province’s short-term plan to “get Albertans working now, building infrastructure that will support our economy and our prosperity long into the future.”

The premier noted the province has been hit with a “triple whammy” this year due to pandemic, the global coronavirus recession, and the oil price crash.

“A lot of folks are keen to get the virus under control and get life back to normal so we can get the economy moving and growing again,” he explained, adding the area has done an excellent job of stopping the spread.

“You’ve had very few active cases since the pandemic began, so congratulations on your care, responsibility, and diligence. If we all remain vigilant and disciplined, we’ll be able to keep COVID-19 under control and continue to carefully reopen more of our own lives, including a safe reopening of schools in September.”

The investment is also expected to assist with the Lakeland's ability to bring in tourists.

“Fishing opportunities are abundant on our beautiful area lakes,” noted Bonnyville-Cold Lake-St. Paul MLA David Hanson. “I’m proud of this investment that will help stimulate our local economy by attracting anglers from near and far.”

The fish hatchery wasn’t the only stop for the Premier.

He’s been on a tour of the Lakeland for the last couple of weeks, and has been meeting with local municipalities during that time.

One of the topics discussed was the proposed changes in how large oil and gas industry taxpayers are assessed, which was a big issue for MD of Bonnyville Reeve Greg Sawchuk.

If the revisions occur, Sawchuk explained the MD would lose between $8-million and $14-million in revenue in the first year alone.

“The downfall would be on everybody in the area,” he noted. “There’s no way we could pass on that revenue loss to residents so what it would mean is a shot to our capital spending. That means fewer projects that we can support in the town, city, and those of our own as well.”

Kenney noted these are worries he’s heard from a number of municipalities.

“They’re raising concerns, which I’m hearing, that there are some gas producers in Alberta whose top expenditure is property tax and many of who are teetering on the brink of bankruptcy. We need an assessment model that ensures they don’t get driven out of business because of taxes at the same time we need to ensure revenues stability for the MDs and there has to be a fair balance there between obviously the taxation capacity and the capacity of businesses to survive these challenging times.”

Town of Bonnyville Mayor Gene Sobolewski said their discussions included the regional waterline coming in $10-million over budget, and the position the town will be in if the province doesn’t cover their portion of the overage.

“He needed to hear some of the issues that we’ve also been speaking with our MLA on and that there’s going to be a requirement for some intervention and assistance to overcome these issues,” Sobolewski detailed, adding he hopes Kenney heard their concerns and will take them seriously.

Bicycle skills park and trails coming to Cold Lake
Sep 16, 2020 8:00 AM
Comments
We welcome your feedback and encourage you to share your thoughts. We ask that you be respectful of others and their points of view, refrain from personal attacks and stay on topic. To learn about our commenting policies and how we moderate, please read our Community Guidelines.