Wolverine makes it back home

A statue of the comic book character Wolverine, created by a B.C. artist, is currently at the Cold Lake Library's north branch
Aug 18, 2020 12:30 PM By: Robynne Henry 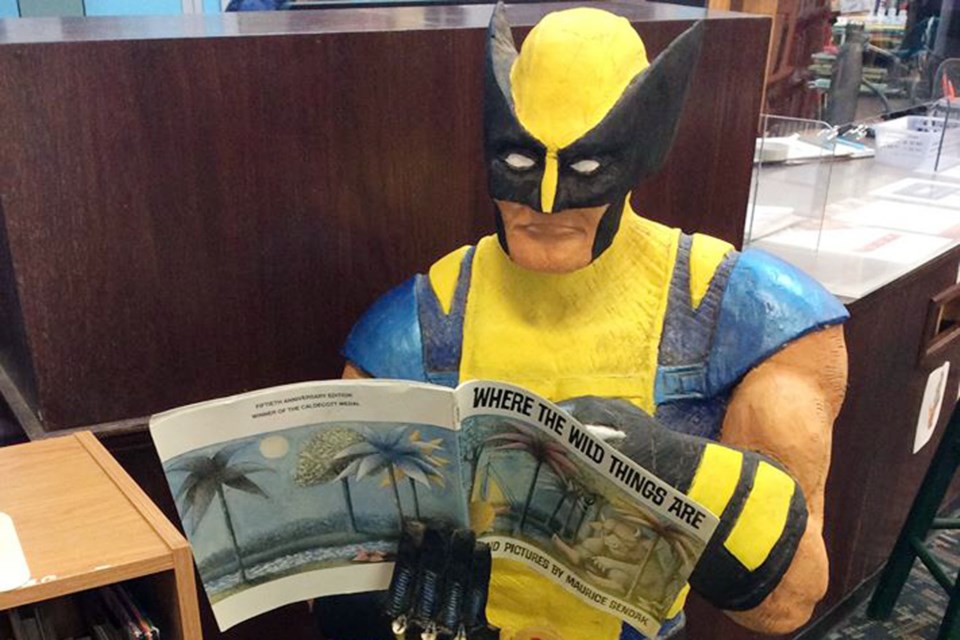 Wolverine has taken up residence at the north branch of the Cold Lake Library. Photo submitted.

COLD LAKE – Comic book fans will see a familiar face the next time they visit the north branch of the Cold Lake Library.

A wooden statue of Wolverine, a character in the popular X-Men comics, has taken up residence at the branch in honour of his origins that say he’s from the Cold Lake area.

Originally, the plan was to have local artists come together to create the statue. But, after those plans fell through, an artist from out-of-province stepped up to put Wolverine's birthplace on the map.

“An artist from British Columbia contacted us and said ‘can I be a part of it?’ I told him it fell through, but he still wanted to do something for us. So he took the project on for himself and he was very happy to donate it to the library,” explained north branch assistant director Tanya Boudreau, who was also part of the original group.

Jonjo Nally, a British Columbia-based artist, donated the art piece after learning that one of his favourite childhood characters was from a little town in Alberta.

“That kind of set the pathway and then it was a few years later that it just started showing up that he was from just outside of Cold Lake in the comics and on the fan pages,” Nally recalled. “The day I read it I was like ‘What? Cold Lake? That’s mental.’ I thought they would do a fictitious town, like Tombstone or something like that, but they actually picked somewhere that was actually there and I thought that was amazing.”

Wolverine is currently in the graphic novel and comics areas in the north branch library, hunched over and reading Maurice Sendak’s 'Where the Wild Things Are,' which is Nally’s favourite book.

Boudreau said they plan to switch out what he happens to be reading, as his hand was designed to hold different novels.

Building a life-sized Wolverine wasn’t an easy feat. Over two and a half years, Nally took his time designing, carving, and painting the figure to be as true to the character as possible.

His yellow and blue outfit with a black mask with pointed ear-like objects was inspired by the costume the character wears in the comics from the '90s, but Nally took inspiration from the different renditions over the years.

When Nally learned Wolverine would be perched at the library, he realized he wouldn’t be able to do a hulking man with his signature claws out for safety reasons. Instead, he wanted him to fit the environment and took inspiration from American painter and illustrator, Norman Rockwell.

“He captures the human body like a photograph or a snapshot and I really love how he did it,” detailed Nally. “I thought that maybe I’d try that and I got this image in my head that I couldn’t shake. That’s what you’re looking at when you come in, that was the image burned in my brain and I just thought I’d give it a try and see what happens.”

Since Wolverine came to the Cold Lake Library, Bourdeau said he “adds a little magic and colour to the place.”

“We’ve had new people come to the library we’ve never seen before come in to see him and take a picture of him. I’ve heard parents explain to their kids, especially younger kids, who he is and they take out our Wolverine comics. It’s been very positive,” she added.

Cold Lake detachment locking its doors, Bonnyville RCMP limiting access
Nov 18, 2020 10:33 AM
LOCATED RCMP looking for teenager from Cold Lake
Nov 16, 2020 5:27 PM
Comments
We welcome your feedback and encourage you to share your thoughts. We ask that you be respectful of others and their points of view, refrain from personal attacks and stay on topic. To learn about our commenting policies and how we moderate, please read our Community Guidelines.