If all else fails, play pickleball – and why not road hockey?

Note: This story was written prior to the Dec. 8 provincial announcement of new measures in place, banning all social gatherings indoors and outdoors.
Dec 9, 2020 1:00 PM By: Doug Bassett 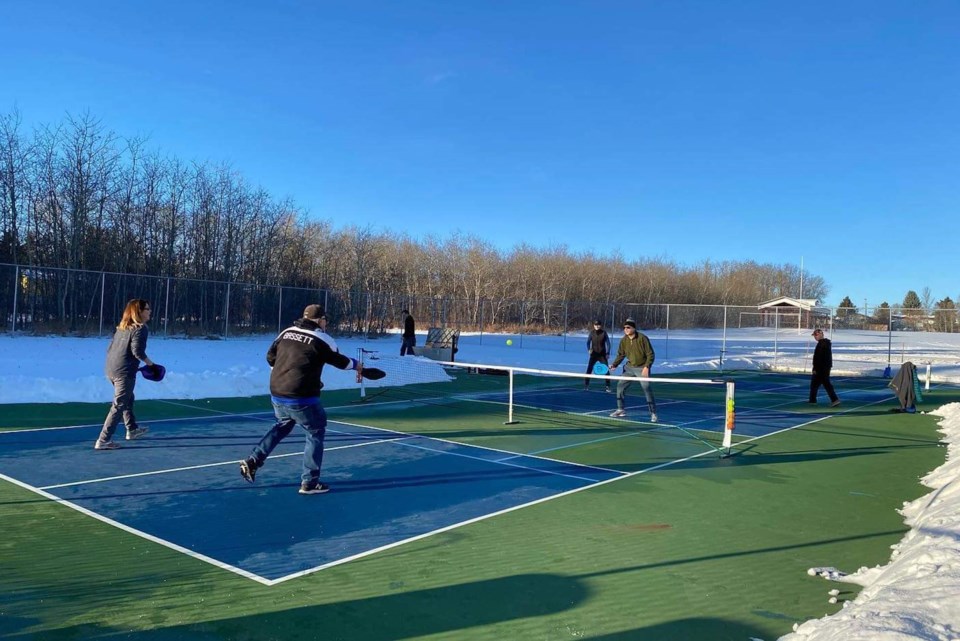 Last week, Elk Point Review sports reporter Doug Bassett and his fellow members of the Elk Point Pickleball Club got back on the outdoor courts, cleared of snow by member Doug Lindquist, after their temporary courts in the Allied Arts Centre were closed down by increased COVID-19 health regulations. Town of Elk Point photo.

*Note: This story was written prior to the Dec. 8 provincial announcement of new measures in place, banning all social gatherings indoors and outdoors.

ELK POINT - These desperate times bring out desperate measures! They say pickleball is the fastest growing sport in North America. After playing it now for a few years, I can see why. It’s a ton of fun, great exercise and almost any age can play.

It can become very fast and competitive, or easy going and laid back. All depends who you are playing. I played pickleball twice a week outside this summer with our group from early May until the middle of October.

The evenings were starting to get a little short and the weather a bit cool, so it was time to move indoors for the winter. The Elk Point Pickleball Club was shut out of the normal winter venue at the F. G. Miller High School because of COVID-19. But we found a venue at the Allied Arts and were able to set up two nets.

And since most of the dance clubs and other users were shut down, we played a couple of nights a week. And then this latest lock-down forced the Allied Arts Society to completely close their building too. Now what? If there’s a will, there’s a way. Doug ‘D2’ Lindquist took the initiative to investigate using the outdoor courts.

On Nov. 30, he grabbed his shovel from home, went over the outdoor pickle ball courts and started shovelling. The forecast was above freezing weather for the next 10 days. If it was 10 or 20 below like most Decembers he probably would have stayed home and saved his energy. After moving a bit of snow, he noticed that it was bare and dry underneath.

In a couple of hours, by himself, he shoveled off one court. He carried on the next day too. Shoveled off a second court. He did encounter some ice on the north end of the courts, so on Wednesday he did a little melting and chipping to take care of that.

On Thursday morning, the message went out to the group. Outside courts are good to go and the forecast is plus one. So, we set up the nets and played for two hours. And for the rest of the week, a few players have gotten together at 1 p.m. and played for a couple of hours.

We play with less than 10 people and it's outside, so we can safely stay within the COVID-19 restrictions. Not only is it great exercise, it’s good for the brain too. Get out there and have some laughs. We call it the Winter Classic of pickleball.

I wonder what happened to kids playing road hockey? I never see kids playing it anymore. Remember the good old days, yelling ‘car!’ and moving the nets off to the side. And people cursing those darn kids who are out playing on the road again!

Do kids even go outside to play at all anymore? I totally agree that it sucks that the A. G. Ross Arena is closed due to COVID-19 and organized hockey is shut down. Believe me when I say, I am just as hurt about it as anyone. Not going to the rink on the weekend to run the clock, play music and have my usual odd hot dog… or two.

But, it only takes a couple of kids and maybe a dad to organize an outdoor game of road hockey. The weather has been too warm to flood the outdoor rink by the arena. And all the ponds and lakes are still a little iffy to skate on. But when I was a kid, if the ice was crappy on the pond, we would play road hockey.

And at school at recess, we would play road hockey. And even when I went to college, we still played road hockey, in the parking lot at lunchtime.

When my son was young, we played road hockey almost every day, right after supper, out on the street in front of our house with the two neighbour kids, Tim and Denny Hudy. Timmy was Eddy ‘the Eagle’ Belford in net and I was Jonny Bower. Denny and Jordan would battle it out. I know the kids still have school, but what about after school or on the weekend?

Grab a few neighbourhood kids, one goalie and one forward, that’s all you really need. Add more players as they show up. Set up a couple of nets or even a pair of boots and start playing. An old stick, a tennis ball or a rubber puck. That’s it. I bet most of the guys in the NHL played road hockey. And most of them still do.

I know Mark ‘the Marksman’ Letestu did, for sure, with the Circle Drive gang. This nice weather won’t last. Take advantage of it. You kids need to get outside and play!!

And now for the K. A. Campbell quote of the week: “I’ve been in the twilight of my career longer than most people have had their career,"  Martina Navratilova, tennis player.