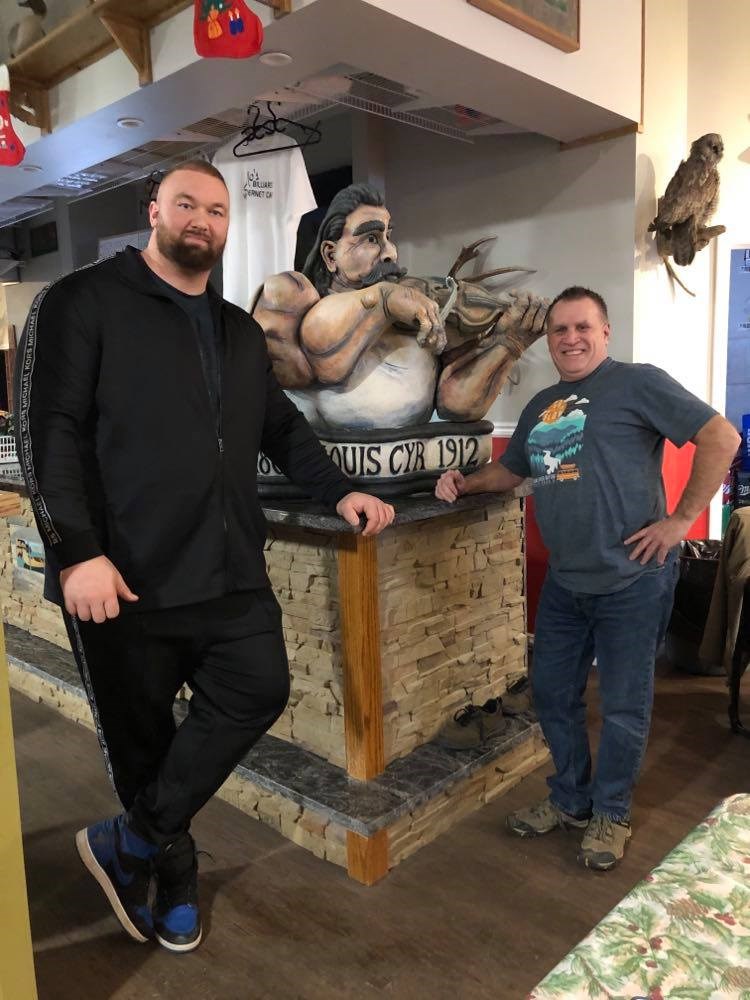 Hafþór Júlíus Björnsson (left), an actor from Game of Thrones, with Michael McArthur, the owner of MO's Billiards.

LAC LA BICHE - Bars and restaurants across the Lakeland are now operating under restrictive COVID-measures put in place by the Alberta government.

The enhanced measures are in place in communities with active cases of the virus that are above certain thresholds. The same restrictions have been placed on similar businesses in larger Alberta centres as cases of the coronavirus increase across the province.

Halting alcohol sales at 10 pm and closing establishments by 11 pm are new rules that went into effect on November 13.

The early last call is a last straw for some area businesses continuing to struggle through a tough economy and the pandemic. Michael McArthur, the owner of MO’s Billiards in Lac La Biche says the changes really hurt establishments that rely on late-night customers.

“I don’t start to get busy until 10 o’clock, and I make 95 per cent of my money after 10:30 pm. The Alberta government is only picking on certain businesses,” said McArthur. “The only businesses being shut down are the bars.”

The new restrictions are in response to the record breaking active cases in the province. Just last Thursday, Alberta recorded the most new COVID-19 infections in a single day, totalling 1,105.

Dr. Deena Hinshaw, Alberta’s Chief Medical Officer of Health, is hoping with the new restrictions, the province will see a decline when it comes to daily cases — but McArthur doesn’t believe restricting bar hours will make enough of an impact.

“If they want to reduce the number of cases, they need to make everyone wear masks,” he said.

Alberta is the only province that has not enforced the mandatory use of masks. Instead, masks are “encouraged” and only mandatory in certain public spaces.

“It’s been kind of ridiculous all across Canada, each province does whatever they want to do, and the only reason we have cases here in Lac La Biche, is because people are travelling to communities that have it.”

For McArthur, the cost to run MO’s Billiards is relatively low because it’s a family-run operation and he owns the building, but he says many businesses have gone under, or will be forced to make some very tough choices in the coming weeks.

“There are so many businesses that had to shut their doors permanently, and the biggest reason is they don’t own their own buildings and they can’t be forking out big rent for nothing,” said McArthur.

Speaking for many in his industry, McArthur says provincial officials need to make wide-reaching changes, not singling out certain businesses or organizations.

“If the Alberta government thinks that wearing masks is the solution, then they need to make people wear them. Don’t shut me down.”