There are no photos to display.

LAC LA BICHE - Members of the Kikino Métis Settlement south of Lac La Biche are demonstrating what can happen when a community comes together to tackle an issue.

Using the advice and experience of Métis elders, along with input from members, some outside resources in the legal field, and local law enforcement, the community is vowing to get tough on crime within its borders.

"Overall, our settlement is a good place to live," said Kikino Métis Settlement council chairman Dean Thompson, "But at different times, we can have some members bringing in non-members who are not-so-good people."

In a statement to the Kikino membership issued by a legal firm helping settlement leaders with the project, penalties that could be included in the bylaw are significant. 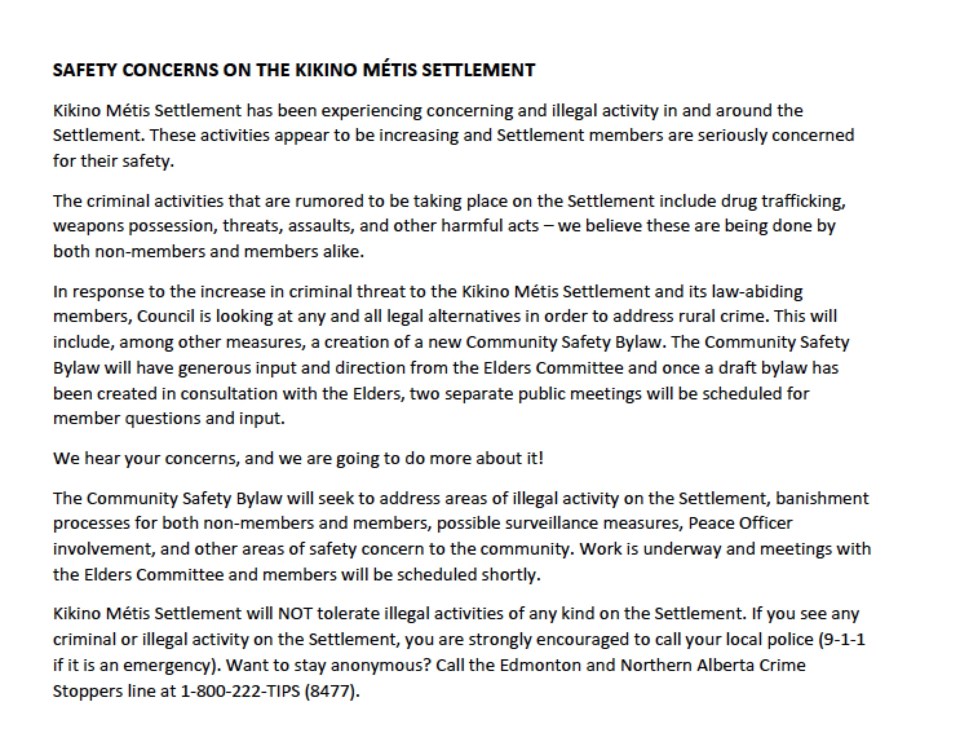 "The Community Safety Bylaw will seek to address areas of illegal activity on the Settlement, banishment processes for both non-members and members, possible surveillance measures, Peace Officer involvement, and other areas of safety concern to the community," notes a portion of the statement.
"It's important," said Thompson regarding the goal of the project. "We want to help make our community a better place, a safer place."

The declaration has been presented to all settlement members, and any follow-up measures will be the main topic of upcoming general membership meetings.

"We are looking for these changes and the drive to come from our membership," said Thompson, who emphasized that the community doesn't have a significant issue with crime — yet.

"Sure, we have a few bad apples. What place doesn't'? We just want to get a jump on it before anything gets out of hand."

The settlement does have the services of a dedicated member of the Lac La Biche RCMP detachment, which Thompson says has been a great addition to the well-being of the community. The formal declaration will help to enhance that policing role by putting the settlement members into active roles when it comes to crime prevention.

"We want the members to be involved, to speak to their own family members to get more people in line with what we can all do together," Thompson told the POST.

Thompson said he would have updates on the consultation process as meetings are arranged.

According to the latest census numbers, the Kikino Métis Settlement has a population of approximately 950 people. A breakdown of how many of those people are settlement members was not available.