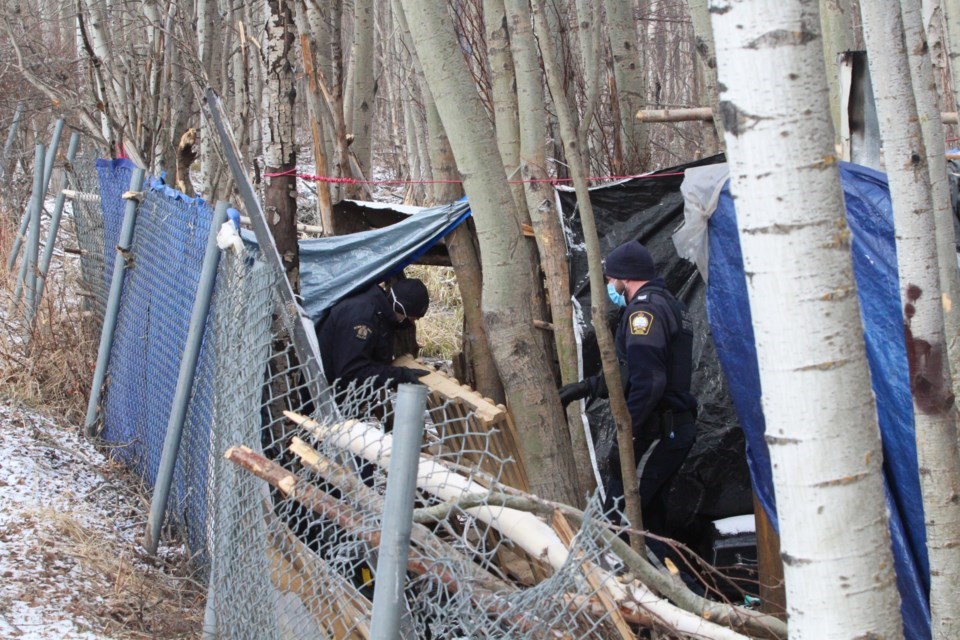 Lac La Biche council has approved the use of municipally-owned land for a temporary homeless camp that will be run in partnership with the Métis Nation of Alberta Region 1 office. File Photo

LAC LA BICHE - Lac La Biche council approved the use of municipally-owned land in the Bonesville subdivision to operate as a temporary homeless camp that will be run in partnership with the Métis Nation of Alberta (MNA) Region 1 office.

The decision to spend $60,000 to set up a temporary camp for homeless individuals for one-year, with a one-dollar lease for the property, came after months of closed session discussions between the two groups. The lease agreement will run from July 13 of this year to July 12 of 2022.

The idea to facilitate a safe and structured site where occupants could access some basic services while not infringing on private property was proposed by the MNA as a short-term solution on the path to providing a fully functioning transitional housing project.

For the first time, councillors took the opportunity during the July 13 council meeting to publicly address previous discussions and the reasons behind supporting the controversial homeless camp, which was carried unanimously.

Coun. Lorin Tkachuk put his support behind the short-term project referencing a similar project that took place in Grande Prairie that had been suggested to council by MNA President Audrey Poitras.

“In the past and in other places, President Audrey Poitras had mentioned to us that (a sanctioned camp) worked successfully as a temporary solution before they had gone to a more permanent solution where (the MNA) also partnered on," said Tkachuk. “One of the only reasons that I'm willing to go with a temporary solution with the MNA is because it brings them in as a community partner for the permanent solution later on.”

He added, “I personally don't think that people living in tents is a good idea, but I'm willing to work with them because of what that brings for the long-term solution.”

According to the agreement, the MNA will monitor and maintain operations at the site and be responsible for acquiring insurance to cover general liability of up to $5 million. The County will assist by supplying services such as portable outhouses, a dumpster and waste removal and access to community services, which has been agreed to consist of three trips a day to or from the property for individuals residing in the designated camp.

Providing the transportation services to and from the site, which is approximately five kilometres from the hamlet of Lac La Biche, will take up the bulk of the $60,000 budgeted for the year. Transportation to and from the site is estimated to cost $50,324 for a driver and fuel. Other costs to be covered by the County include $4,920 for porta-potty, and $3,600 for a dumpster.

Funds for the project will come from the 2021 and 2022 Lac La Biche County municipal operating budgets.

“This is not ideal — obviously — but having the facilities and the transportation to the services is a step in a good direction,” Cote said. “The potential to save someone's life is not only there, I see it also having a potential to save money because the cleanup of these camps and the protective services and everything that goes along with that, comes with the price tag.”

‘Not in my backyard’

Chronic homelessness was highlighted in the community in recent months when occupants of an encampment in a wooded area on privately-owned property south of the Lac La Biche downtown were removed and their ‘tent city’ was evacuated and dismantled. The downtown location was the latest in a series of areas where similar encampments had been removed by municipal officials.

However, behind the scenes, County staff have been working with other community partners to try and assist individuals experiencing homelessness.

“Although it looks like we're sitting idly by — we aren't,” said Coun. Charlyn Moore, referring to space made available at Portage College during extreme cold weather this winter and rooms rented for individuals isolating during the COVID-19 outbreak. Both of these programs were the result of rapid response, but moving forward, the council is hoping for more permanent solutions, which seem to be in short supply.

“As far as the location at Bonesville, it's not perfect. It's not perfect at all. But surrounding the community is either private land, which isn't fair to the private landowner, or is in the backyard of a school and we can't have that,” said Moore. “The county doesn't own a whole lot of publicly accessible land.”

During the council meeting, attention was drawn to the lack of consultation with the residents in the Bonesville area while discussions were progressing in private sessions. Now that information has been made public, council has tasked administration with a way to connect with residents from the area. The Bonesville subdivision is home to approximately 25 homes. The land selected for the camp is said to be surrounded by wooded public lands.

Council had also requested administration provide “a high-level itemized accountability report to date with expenses related to the MNA lease agreement and further costs associated with the previous dismantling of encampments.” With the intention to inform the public of the true cost of homelessness in the community.

A list of 10 rules developed by the MNA that camp occupants will have to follow, is also included in the agreement. The rules say that all occupants must be registered through the MNA office and be respectful of neighbouring business, facilities and the general public. The final rule states that the site is available only until the permanent transitional housing facility is set-up.

Following the establishment of transitional housing, the site will be dismantled.

*With files from Rob McKinley