Mayor vows to encourage mask use

How to greet the mayor

“Forget about that thing with wagging your leg up and down and around — for me, at my age, I’d lose my balance and fall over," Moghrabi told the Lac La Biche POST. " And tapping your elbows?  Don’t we sneeze into our elbows now?  So don’t do that.”

So how do you greet the mayor without elbows, legs, knees or hands coming into contact?

“I like it where you tap your hand against your own heart on your chest and wave,” said the mayor, adding that he’d like to see more of that greeting — COVID or not — as it can relay genuine affection. “I’m trying to educate more people to do it that way.”

Lac La Biche County Mayor Omer Moghrabi is encouraging residents to continue their efforts against the spread of the Coronavirus.

Despite the northeastern Alberta community of about 10,000 people having no reported cases of the respiratory virus since the global pandemic protocols began in March of this year, the mayor says it is essential to keep up the fight.

Admitting that he himself may have lapsed a time or two when it comes to the protocols, he is committing to increasing his own vigilance. Mogbrabi says he hasn’t been wearing a protective mask as much as he should, but  that will be changing.

“By wearing my mask, I want to be setting an example that it protects the person wearing it and those around them,” said the mayor, adding that his renewed adherence to the pandemic protocols will hopefully spark a few more people from their comfort zones. “I want to encourage people out there to realize that now is not the time to think we are done with this ... we need to keep reminding people that this sucker is still out there.”

In the months since the virus first began to alter global activities, the mayor says the ‘new-norm’ has affected even the simplest of gestures.  There’s one of those gestures that he’d like to re-introduce.

The mayor's comments have triggered some residents to queston whether a formal statement from municipal officials to encourage residents to wear masks is needed. On a recent posting on the Lac La Biche POST's facebook page that has reached more than 3,000 people, the suggestion by one reader for a municipal resolution has gained some support, and is likely to create more discusson. 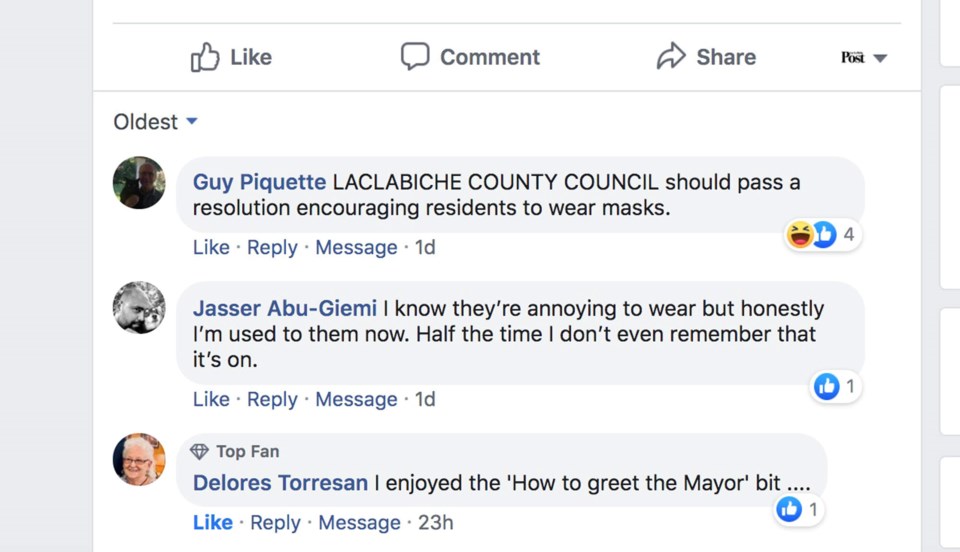 Dozens of protestors marched in Edmonton over the weekend, expressing their opposition to mandatory mask use, saying it went against their freedoms. Mask use during the pandemic has supporters and opponents. Those who support mask use — including experts in the medical field — say the mouth coverings can reduce the spread of the virus that is said to be responsible for 600,000 deaths worldwide. Opponents of mask use, say most masks aren't built to stop the microspcopic droplets that can carry the virus.

*This story is an extenstion of an article previously printed by the Lac La Biche POST and viewed on www.lakelandtoday.ca