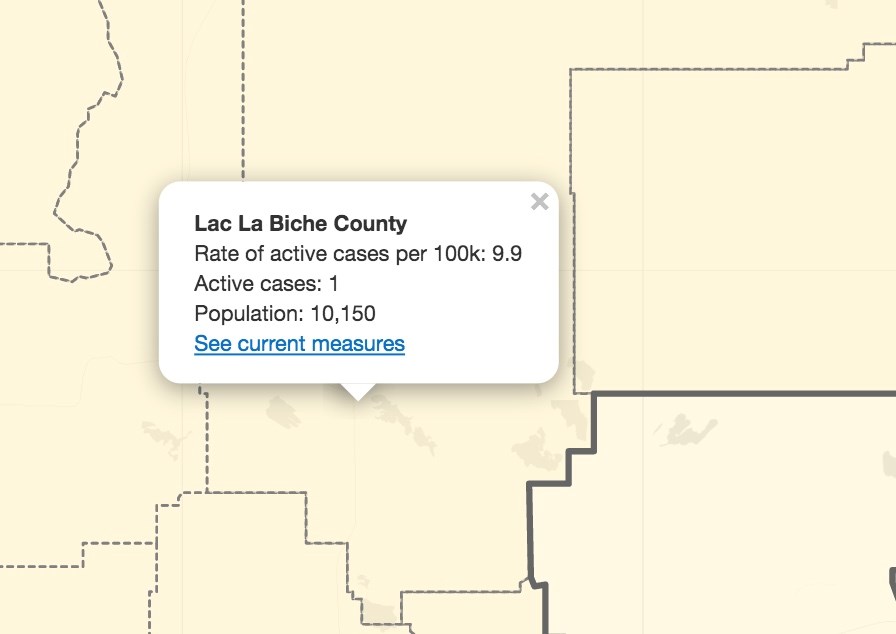 The Thanksgiving weekend began with the global-wide pandemic giving the Lac La Biche area a new statistic. The provincial government's COVID-19 activity map is currently showing one active case of the virus in Lac La Biche County. The update came on Friday night, after a day where 17 residents of the province's northern zone were added to the list of confirmed cases.

According to the province's collection data, of the 17 new cases reported in Alberta's northern zone, seven were between the ages of 20 and 29,  four are males and three females. Of the other 10 new cases across the north, two — one male and one female — are in the 30-39 age range, there are four 40-49 year olds — two women and two men — newly confirmed, two in the 50-59 category, one woman and one man, and one man and one woman are confirmed with coronavirus in the 60-69 age category.

As of Saturday night, there were 105 total active cases in the northern zone. Across the province, there are currently 2,225 active cases.

The current active case in La La Biche County is only the second confirmed case of the COVID-19 since the province began tracking cases in March. The neighbouring MD of Bonnyville currently has one confirmed active case and the County of St. Paul has three. Smoky Lake County currently has four active cases.

Junior Forest Wardens in Lac La Biche
Oct 18, 2020 3:22 PM
Comments
We welcome your feedback and encourage you to share your thoughts. We ask that you be respectful of others and their points of view, refrain from personal attacks and stay on topic. To learn about our commenting policies and how we moderate, please read our Community Guidelines.