The March 21 Boxing Match has been cancelled 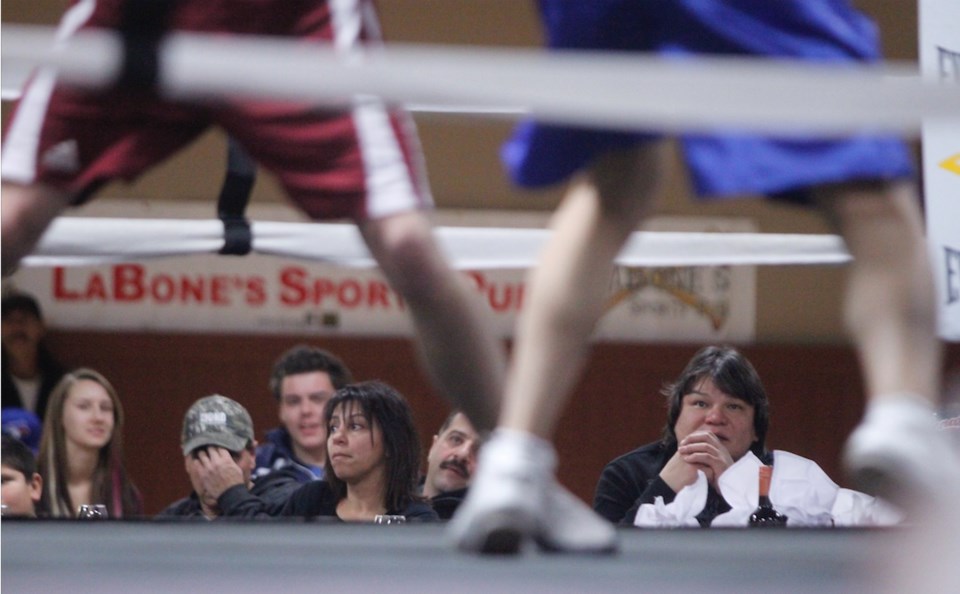 LaBones owner Brian Laboucane watches from ringside at the last fight card held in Lac La Biche. Tomorrow night’s event has been cancelled due to COVID.

The Lac La Biche Boxing Club’s main event slated for tomorrow night will be rescheduled after organizers were dealt a one-two blow as provincial boxing association officials cancelled all matches. and the event's location was closed due to COVID-19.

The Spring Break-Up Boxing Card was going to be filled with dinner, drinks, and 12 provincially-ranked fights at the Bold Center's Devon Room. But due to the recent closure of the Bold Center, and the province's new policies on gatherings of more than 50 people, the event has been cancelled.

The fighters, organizers, sponsors, and boxing lovers are disappointed the event was cancelled, but Jeremy Trimble, the President of the Lac La Biche Boxing Club, believes it’s all for the best.

“It’s probably good that everyone errs on the side of caution,” says Trimble. “Obviously I’m upset that we can’t do it, but it’s probably better off for everyone to take care of themselves right now until we get through this. I think everybody’s main concern is just the well-being of their families and once everything settles we will look at getting things back into the swing of things.”

No social distance in the ring

The call to postpone the event was made by Boxing Alberta a day before Lac La Biche County officials decided to shut down the Bold Center.  Due to the nature of the sport, pitting two combatants against each other with significant body contact, Boxing Alberta has suspended all boxing events across the province.

The Lac La Biche boxing event was the first time the club had planned to host a community event since 2013. That event was a knockout success, with a sold-out room watching local boxers competing with athletes from across Western Canada. The hype that the announcement of this year's event encourages organiziers to postpone the fight night instead of cancelling it.

“We don’t know when we will reschedule it, there have been no dates picked yet,” says Ken Scullion, the Lac La Biche Boxing Club Founder. “Nothing has been confirmed.”

COVID-19 update from Lac La Biche County Mayor Omer Moghrabi
Mar 28, 2020 3:12 PM
Comments
We welcome your feedback and encourage you to share your thoughts on this story. We ask that you be respectful of others and their points of view, refrain from personal attacks and stay on topic. To learn about our commenting policies and how we moderate, please read our Community Guidelines.