Blizzard roars into the Lakeland 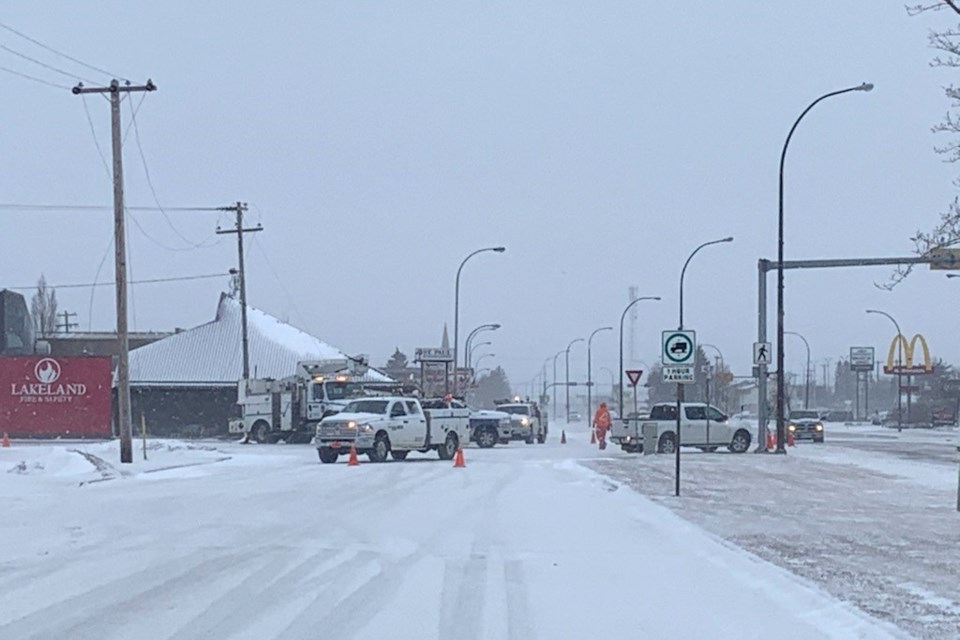 Crews were busy getting power back up and running on Monday morning in St. Paul, following an outage that saw a large area without electricity for a number of hours.Janice Huser photo

LAKELAND - March may have come in like a lamb but the storm that roared across the Lakeland region late Sunday and into Monday sees the month going out like a lion.

The blizzard knocked out power across a wide area with ATCO Electric reporting power outages in Bonnyville, St. Paul, Smoky Lake and Vegreville areas and all points in between due to high winds and storm conditions throughout the region.

“As the extreme weather continues, ATCO crews will keep working throughout the day to restore power as safely and quickly as possible,” ATCO said on its Twitter account Monday morning.

Area residents experienced blips in the power in the early morning hours of Monday as the wind picked up and then all went dark around 2:30 a.m. to 3:30 a.m. for many homeowners in the Saddle Lake/St. Paul/Elk Point areas.

By mid-morning Monday, upwards of seven hours later, the power was still off in many rural locations, although St. Paul town residents were starting to see some lights coming back on. Approximately 1,700 customers in the area were impacted by the outages due to the windstorm.

Town of St. Paul Deputy Fire Chief Henry Thompson made an early morning trip to the fire hall to make sure the power was on. He said the backup battery system is good for about two hours before a generator has to be started.

“We’re lucky, we’ve got power on at the fire hall, our radios are working so we’re good for now,” he said shortly after 9 a.m.

While the department had not received any emergency calls as of press time, he said area highways were in “terrible condition” and it was likely a good thing spring break is underway for area schools so he expected many people were choosing to hunker down at home for the day.

By 3:30 p.m. Environment Canada had ended its snowfall warning for the Lakeland region.

Shortly after 3 p,m. ATCO Electric confirmed that power had been restored to many homes in the area with just small pockets here and there waiting for their turn.