The St. Paul Canadiens played its most complete game all season when the North Eastern Alberta Jr. B hockey League team faced the Wainwright Bisons, beating them 5-3 on Jan. 11.
Jan 16, 2020 2:00 PM By: Rushanthi Kesunathan 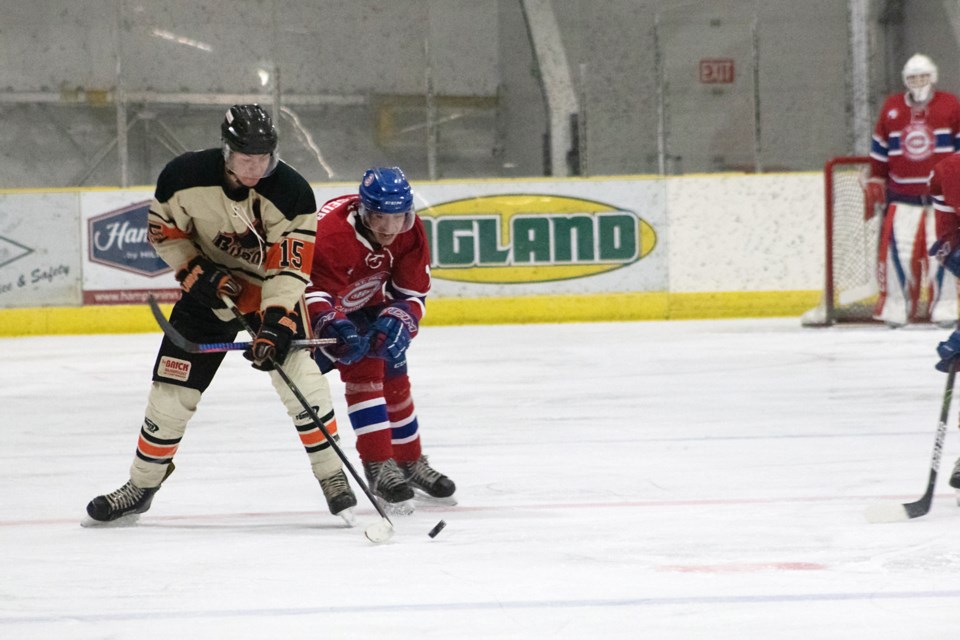 The St. Paul Jr. B Canadiens battled on home ice against the top team in the league, Jan. 11. The Canadiens came out on top with a score of 5-3. Rushanthi Kesunathan photo

The St. Paul Canadiens Jr. B team played its most complete game all season when the team faced the Wainwright Bisons beating them 5-3 on Saturday, Jan. 11.

The game took place at the Clancy Richard Arena, and the Canadiens were slow to catch up in the first period, after failing to collect any shots. The team went into the third period behind, and the score sitting at 3-2, with the Bisons leading by one goal.

“For the most part we took care of the puck and I thought our defensive zone coverage was as good as its been all year,” head coach Shawn Germain told the Journal.

Goalie Bradley Mistol saved 38 of 41 shots made by the Bisons.

“We battled back from a couple of deficits against a very good team,” Germain said. “The reason we were able to that because Brad Mistol was exceptional in net for us.”

The Bisons are currently sitting first in the league, the Canadiens are in third, and the Lac La Biche Clippers take second.

Bisons’ Carson James collected two goals for the team in the first and second periods, both on the powerplay. Kailin Becher also scored for the Bisons in the second period.

Scoring for the Canadiens in the second period was Orrie Wood, assisted by Lane Wycotte; and Brody Green, assisted by Nathan Degraves and Janson Pashniak.

The Canadiens put on a show for the home crowd in the third period, with Janson Pashniak scoring the first two goals of the period, putting the score to 4-3 for the Canadiens. Assists were given to Wood, Tyler Nypower and Degraves.

The third period also saw Brendan Levasseur collect a goal short-handed on an empty net with an assist from Brayden Goulet.

The Canadiens will play two away games this weekend, first travelling to take on Vermilion on Jan. 17, then the team will face a rematch with the Bisons on Jan. 18. On Jan. 24, the Canadiens will hit the road again for a game against the Lloydminster Bandits.

The Canadiens will play their next home game Jan. 25 against the Vegreville Rangers at the Clancy Richard Arena at 8 p.m.