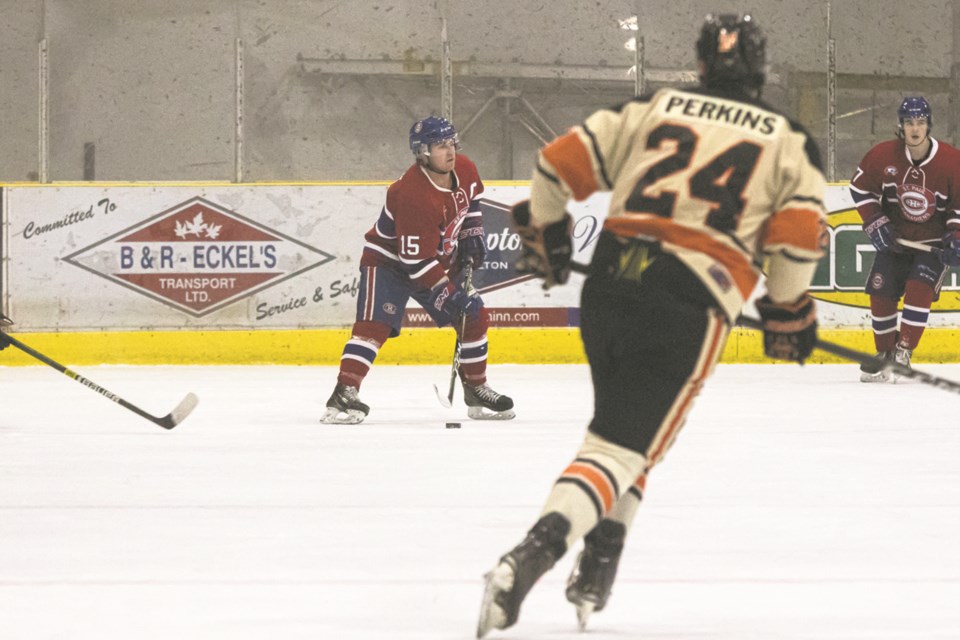 The St. Paul Jr. B Canadiens took on the Wainwright Bisons on Saturday, losing a close game in overtime.

The Junior B St. Paul Canadiens lost to the Wainwright Bisons in overtime, in a home game played on Dec. 14 at the Clancy Richard Arena. The final score was 7-6 for the Bisons boys who netted the winning goal in an unguarded net.

After falling behind, the Canadiens managed to tie the game in the second period and kept it that way into the third period.

The boys battled back several times throughout the game against a great team, says head coach Shawn Germain.

“We were happy with our work ethic and compete level this weekend,” Germain said. “Obviously, seven goals is way too much to give up and expect to win. We need to be much better defensively and that's what we'll attack this week in practice.”

Lane Wycotte and Tison Young netted the first two goals for the team during the first period with assists from Brayden Goulet, Dylan Lindal, Arman Grewal, and Darwin Morin.

The game would be tied up heading into the third. Brody Green and Young both scored, with assists from Lane Wycotte, Degraves, Orrie Wood and Janson Pashniak, but Wainwright would net two goals of their own pushing the game into overtime.

Wainwright's Kailin Becher would take credit for the game-winning goal just three and a half minutes into overtime.

On Friday, the Canadiens played another home game against the Lloydminster Bandits, beating them in what looked like an easy win for the St. Paul team. The final score was 7-2.

The Bandits definitely didn’t enjoy themselves during Friday’s game – the team tallied 72 penalty minutes on 17 infractions. While the Canadiens tallied 27 minutes on eight infractions.

The Canadiens will play two more home games this at the Clancy Richard Arena on Dec. 18 (Lac La Biche Clippers) and Dec. 20 (Cold Lake Ice), before heading into a Christmas break.

RCMP lay charges after break-in at St. Paul Education shop
Sep 25, 2020 10:38 AM
Comments
We welcome your feedback and encourage you to share your thoughts. We ask that you be respectful of others and their points of view, refrain from personal attacks and stay on topic. To learn about our commenting policies and how we moderate, please read our Community Guidelines.