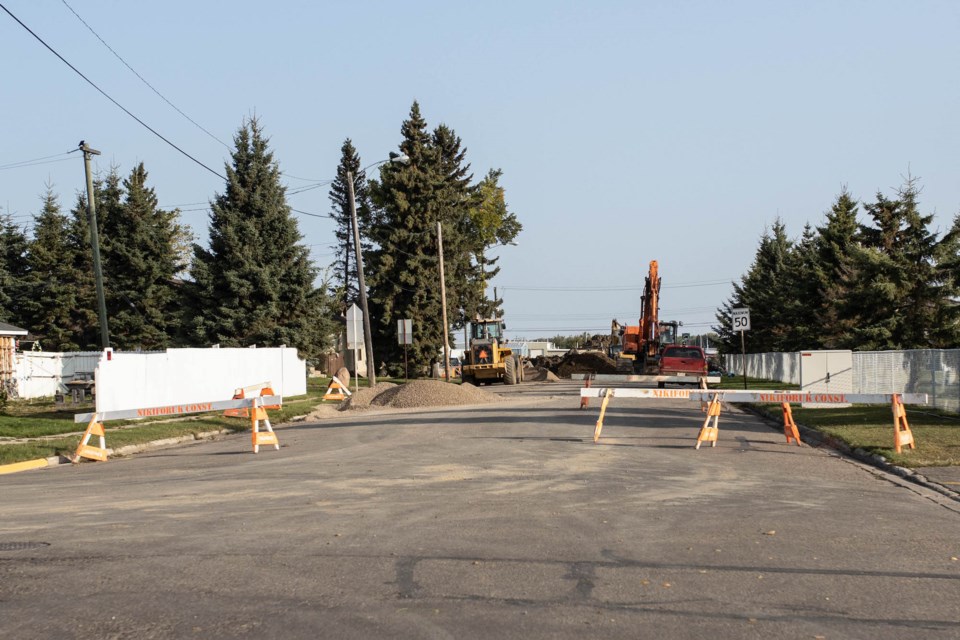 Last week, a water main was being replaced in the area of 48th Street and 52nd Avenue.

ST. PAUL - A cannabis store may soon be coming to St. Paul, but the chosen location for the business doesn't quite meet the municipality's Land Use Bylaw.

The business is hoping to open at 4225 50th Ave in St. Paul, heard council during the Sept. 14 regular council meeting. Because the location is located off a service road, and not directly on main street, an amendment to the LUB must be made.

Coun. Nathan Taylor asked if all provincial guidelines are being met, to which administration responded yes.

Aline Brousseau, Director of Planning & Legislative Services, informed council that the only issue is that the location is fronting a service road, and not main street, although the building still does face main street. She noted that there are a couple areas in town where this issue could arise.

A motion to approve first reading of Bylaw 2020-11: Land Use Bylaw Text amendment be given first reading was approved. The Municipal Planning Commission previously passed a motion in August to allow for the development to proceed.

A public hearing will be held on Oct. 13, to hear public input on the proposed bylaw. If no concerns are raised at the public hearing, final readings of the bylaw could also occur on Oct. 13.

On Tuesday morning, CAO Kim Heyman confirmed that about 70 per cent of tax revenues had been received by the Town of St. Paul. The municipality extended the deadline for penalties to Sept. 30, giving people extra time to pay their property taxes this year, due to possible financial challenges being experienced this spring as a result of the COVID-19 pandemic.

Heyman noted that typically, the town collects about 96 per cent of its taxes as of the regular deadline in June.

Over the last month, St. Paul Municipal Enforcement has received complaints regarding drone use at Lagasse Park.

Drones are regulated by Transport Canada. And, according to information presented to council from Director of Protective Services Trevor Kotowich, unless someone is following an established Transport Canada procedure, they cannot fly drones within 5.6 km from any airport or within 1.9 km from a heliport.

"The Town of St. Paul cannot provide permissions for drone usage, as drones are classified as aircraft and fall under federal jurisdiction," explained Kotowich in a letter included in the town's Sept. 14 agenda package. "Complaints about drone use in the Town of St. Paul should be directed to the RCMP at 780-645-8888."

Work has begun on a water main replacement in the 48th Street and 52nd Avenue area.

While there were originally plans to pave this block, the question was brought to council about replacing the concrete water main first, as the sewer main had already been replaced prior to paving the surface, explained Director of Public Works Steven Jeffery.

A decision to proceed with the water main replacement was made, but council also asked administration to check on the balance in the town's water distribution reserve account, in case the project could be funded from there.

After securing a contractor for construction, it was determined there was enough funds in the reserve account to cover the cost of the project. Council carried a motion to approve using the funds from the water distribution reserve.

Work was set to begin on the water main replacement early last week, and it would take about five days to complete.

Council has approved the purchase of new furnaces for the Town of St. Paul administration building. The cost of the replacement if just under $20,000.

BONNYVILLE RCMP REPORT: Complaint leads to impaired driving charge
Oct 23, 2020 5:00 PM
Comments
We welcome your feedback and encourage you to share your thoughts. We ask that you be respectful of others and their points of view, refrain from personal attacks and stay on topic. To learn about our commenting policies and how we moderate, please read our Community Guidelines.