Peace officers put pen to paper instead of pedal to metal

The flashing red and blue lights of the peace officer’s SUV were signalling the driver of the small car to pull over.

Last Thursday afternoon — September 15 at about 3 pm —  a Lac La Biche County peace officer on patrol in his vehicle noticed that an occupant in the small car wasn’t wearing a seat-belt. The peace officer and the small car were part of the traffic flow entering the Main Street school zone just before classes let out at the Light of Christ Catholic School.

The car continued to drive ahead of the peace officer's SUV, continuing in the centre lane of the four-lane Main Street. When the officer sounded the siren to accompany the flashing lights, the small car signalled towards the curb lane.

But instead of pulling over, the car sped up rapidly, passing other vehicles as it raced past the school’s playground and playing fields. Speeding westbound onto Highway 55, the car was accelerating away from the peace officer at speeds in excess of 150 km/h— but the chase wasn’t on.

Hundreds of metres behind the speeding car, the peace officer’s SUV was parked on the side of the road, its emergency lights and siren no longer engaged while the officer dutifully documented details of the incident, including the license plate and full description of the car and its occupants. The details were then passed onto the RCMP.

“Community Peace Officers in the Province of Alberta are not allowed to enter pursuits due to the risk to public safety,” says Chris Clark, the manager of Enforcement Services in Lac La Biche County. “There is a significant risk of collisions when vehicles fail to stop and the officer enters into a pursuit.”

Carefully and accurately documenting the incident and partnering with the local RCMP detachment provides effective results without unnecessary risks to residents, officers and the criminals, said Clark.

In Thursday’s incident, the RCMP were notified immediately. Officers conducted patrols to find the vehicle, but it wasn’t located.

The lack of a vehicle doesn’t mean a lack of charges, however. Clark says that from the descriptive report filed by the peace officer, arrest documents have been prepared.

“Due to the ongoing investigation and a license plate being obtained, charges are being laid against the registered owner of the motor vehicle,” Clark told the Lac La Biche POST newsroom.

The progress of the investigation so far shows that keen observation skills can keep pace with crime even if peace officers can’t always keep pace with the criminals. Clark says that statistically, the paper-chase is more efficient and can provide better results than an actual chase.

“Typically the risk to the public and occupants of the vehicle far outweighs the likeliness of apprehension,“ Clark explained, adding that any witnesses to the September 15 event can contact the Protective Services offices as the investigation continues.

Did you see anything?

“If members of the public observed the vehicle driving dangerously and can confirm the vehicle description and license plate, they should contact our office at (780) 623-6767,” he said.

Traffic is a big ticket item

According to the most recent quarterly report from the Enforcement Services department that was released at the end of August, there were five other fail to stop files investigated through the summer months. The same Lac La Biche County statistics show that about one-third of all monthly files for peace officers— about 50 per month — relate to Traffic Safety Act infractions. The same reports show that more than 50 per cent of those files result in violation tickets being issued.

Lac La Biche RCMP statistics show similar highlights. In a report released in August, quarterly statistics for the detachment from April to June of 2022 show that more than 300 of approximately 1,000 files over those four months related to the Traffic Safety Act and motor vehicles. 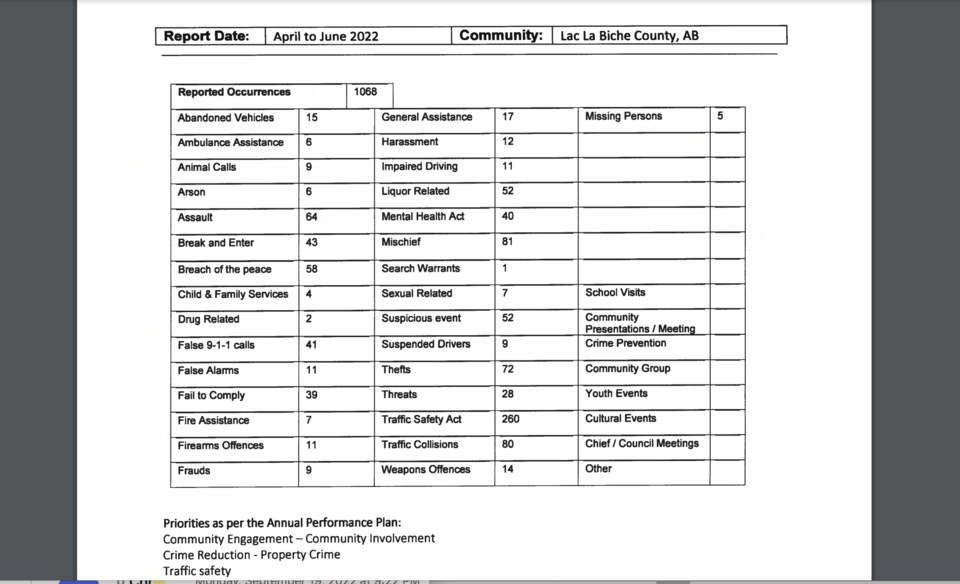 According to Lac La Biche RCMP Staff Sargent Neil Bailey, traffic safety is one of the top four priorities in the detachment's annual performance plan. Community involvement and engagement along with crime reduction and property crime round out the priorities.