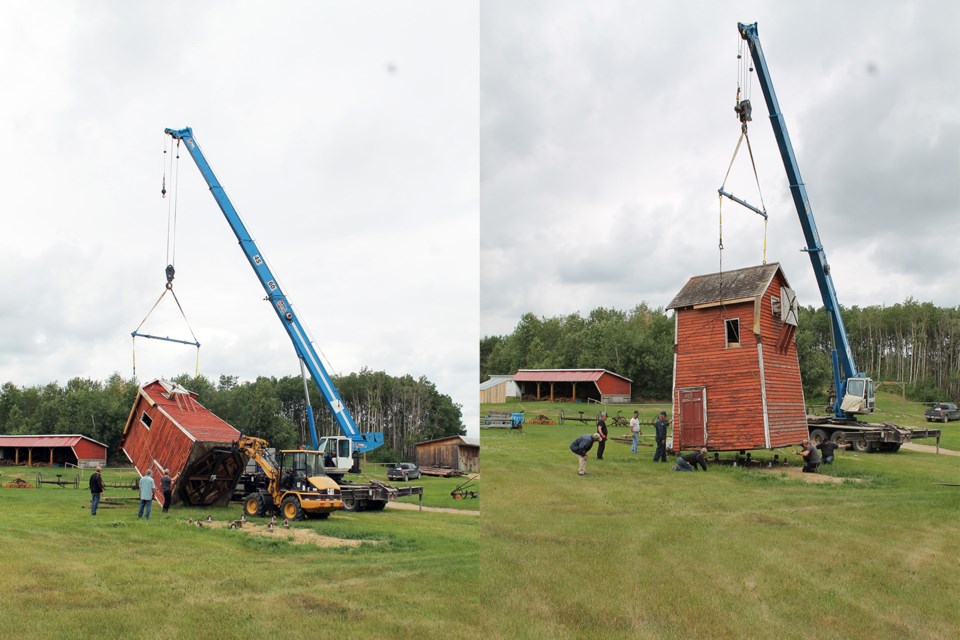 The forklift moves in to assist in moving the mill to an upright position. The track allowing the mill to rotate on the circle of anchored wheels in the foreground, is visible on the bottom of the structure.Vicki Brooker photos

MALLAIG - Back in the 1960s, local residents in the Shandro area south and west of Vilna made the decision to document the history of their area by building a living museum that eventually included a number of buildings, from a stunningly beautiful Ukrainian Orthodox church to the Willingdon train station, along with vintage farm equipment and other reminders of the early days of settlement in the area.

A wind-powered grist mill was one of the most striking and unusual buildings at the museum, which has been closed to the public since the late 1990s, and now that grist mill has a new home, more than 80 km to the northeast, at another living museum also created and operated by local volunteers, Mallaig’s Haying in the 30's.

Haying in the 30's, which has opened its gates each year from 1999 to2019 for an extremely well attended August long weekend event of demonstrations, entertainment and old-fashioned fun, could not hold the event last year due to the COVID-19 pandemic, and made the decision a few weeks ago to once again keep the gates closed, due to continuing health regulations.

Last year was an extremely busy time for the Haying in the 30's crew, as their weekly Wednesday night work bees saw new rail fencing installed, a new donation booth constructed and its predecessor turned into a dentist’s office and a root cellar. Construction also began on a new raft to replace the original, which legend said brought homesteaders down the North Saskatchewan River from Edmonton.

Plans were also underway at that time to enlarge the area where a crew of volunteers prepare food for thousands of Haying in the 30's visitors each year, and also to move the newly acquired grist mill from Shandro to Mallaig.

The mill made the journey to Mallaig in mid October, but spent the winter lying on its side, waiting for a new foundation to be put in place.

And a very special foundation it is. A Ukrainian craftsman, who is said to have brought the design for all the working parts from his homeland in his memory, built the grist mill at the Shandro site. When completed, the mill sat on a turntable and could be moved by a horse hitched to a long pole protruding from one side of its base so its vanes were in the best location to catch the wind.

Rather than recreating the turntable, the modern day craftsmen in charge of its new location attached a track to the bottom of its floor, and set a series of wheels in the foundation that would enable it to be turned into the wind, even without the use of a horse.

Lifting it from its winter sleeping spot and into place on the new turning mechanism was finally accomplished this past Tuesday, when a tall B& R Eckels crane and a large forklift combined to make the move, with cables lifting the structure upright and the forklift inching backwards while lowering the bottom to just above ground level, with men with ropes guiding it into position.

The cables were still being removed when Haying volunteer Albert Boratynec invited the volunteers to take a look inside. Up a steep set of very narrow stairs, they saw a pair of 1,000-pound grindstones still strapped down for the move, and the gears that will once again turn the upper stone, once the massive vanes, removed for the journey, are put in place. Those vanes connect to a shaft that turns a massive wooden wheel with wooden pegs all around it, which turns a hand-carved wooden gear that turns the mill stone, grinding grain coming from a hopper in one corner of the upper room into flour, Boratynec told viewers.

The hardworking Haying volunteers hope to have the mill do just that in just over a year’s time, when Haying in the 30s once again hopes to open its gates to a huge crowd of visitors, who will enjoy this trip back in time while supporting Haying in the 30s mission of providing financial support for cancer victims near and far from the donations those visitors provide.