“It was good to see the kids out doing what they love, looking after their horses and being able to compete to go further in high school rodeo.”
Apr 28, 2021 6:00 PM By: Clare Gauvreau 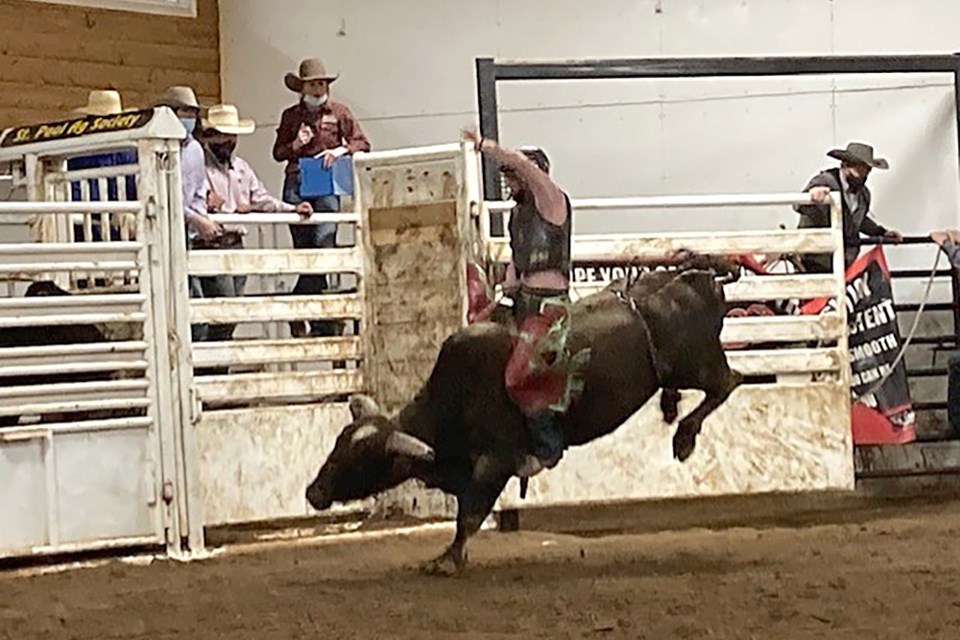 Photo supplied
ST. PAUL - COVID-19 was wrangled to the sidelines as the St. Paul and District Agricultural Society’s annual high school rodeo went ahead in St. Paul April 16-18. What could have been a wild ride for organizers turned out to be a fairly smooth run with everyone doing their part to stay on the right side of public health guidelines.

“As far as a rodeo goes for the contestants and competitors it was a huge success. As far as the ag. society we had a good time doing something to keep the kids going. It was something for the kids to do other than walk the streets,” organizer Brian Pederson said last week in summing up the weekend.

Pederson has been heading up the high school rodeo for more than 20 years and said in a normal year there is a lot of work involved, throw a pandemic into the mix and that makes things even more challenging. The rodeo didn’t get the green light from Alberta Health Services until a week before, so it involved a bit of a scramble to pull it off. However, Pederson said it was worth the effort.

“It was stressful leading up to it, whether or not it was going to go or not and waiting on the letter of exemption,” he said, adding once that was received from AHS it was all hands on deck to ensure the event ran smoothly and protocols were strictly followed.

“It was good to see the kids out doing what they love, looking after their horses and being able to compete to go further in high school rodeo.”

He said everyone was “mindful and respectful” of the public health rules that had to be adhered to, including the fact that a maximum of 10 contestants, including coaches, were permitted in the Ag. Corral at one time.

“That all went very well for the most part. The volunteers from the ag. society were wonderful and did a heck of a good job monitoring and directing flow - keeping the kids coming and going.”

So, for a brief moment in time, the pandemic, although not forgotten, probably wasn’t the first thing on the minds of the high school competitors as they put their rodeo skills to the test for a chance to make their way to the provincial and national finals.

With 75 junior participants on Friday and 125 senior high competitors on Saturday and Sunday, the rodeo drew entries from across the province.

After the dust settled, Owen Schauer of Halkirk tallied up 75 points to make him the high point champion in the men’s senior high competition after earning strong finishes in steer wrestling, tie-down roping and working cow horse event.

Rodeo parent Rocky Ross was presented with the Leif Pederson Spirit Award, named in memory of Brian Pederson’s son who died in a motor vehicle accident in 2011.

Pederson said local businesses were onside and with many lending their support to the event.

“The community was very supportive of the ag. society. They were happy to support to get things going in any way they possibly could.”