There was an impressive display of home grown vegetables, canning, baking and traditional arts and crafts at the Fall Harvest fair held at the Goodfish Cultural Centre on Sept. 20 from 10 a.m. to 2 p.m.
Sep 28, 2010 12:00 AM By: Lakeland Today Staff 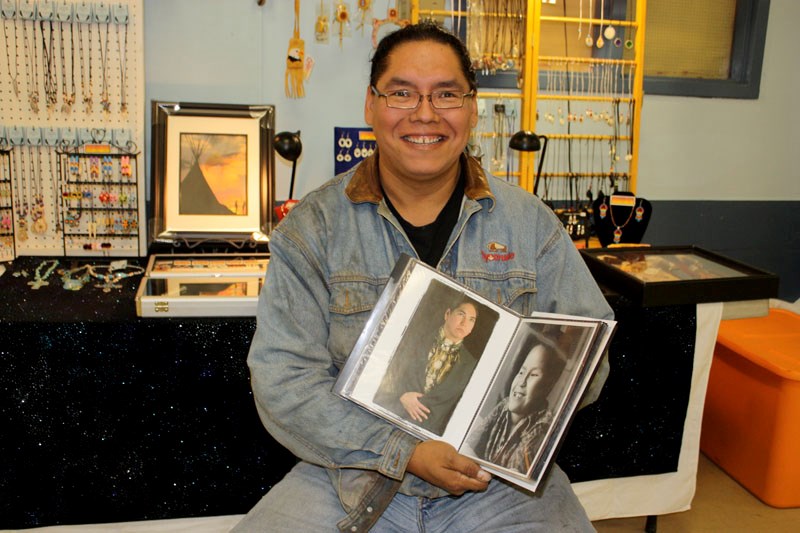 Samuel Bull displays some of his photography at the Fall Harvest fair in Goodfish Lake on Sept. 20.

There was an impressive display of home grown vegetables, canning, baking and traditional arts and crafts at the Fall Harvest fair held at the Goodfish Cultural Centre on Sept. 20 from 10 a.m. to 2 p.m.

“The exhibits are very, very good this year,” said Edith Zawadiuk, a home economist and bench show judge from the area that has been involved with the fall fair for over 50 years. “This has been a difficult year to grow vegetables because of the erratic weather but the displays here are very good.”

Zawadiuk explained that judging the Goodfish Fall Harvest Fair is a little different than judging other bench shows because people are welcome to bring anything that they have made throughout the year and there are no preset categories. The items are judged on a Danish system in which each item brought in is evaluated on a scale of one to 10, with marks then totaled.

“However, everybody wins if they enter,” explained event organizer Bernadette Koluk. She said that $1,700 in cash prizes were distributed to the participants working the 26 tables at this year’s fair.

Lloyd and Dorothy Jackson had several tables to display the items grown or made by several generations of their family.

“Their children are proud to say they got their many talents from their parents,” said a sign displayed on their table, alongside a selection of beadwork, masks, sewing and other traditional arts and crafts.

Shirley Pruden said that she looks forward to the Fall Harvest fair every year, as she loves to show the vegetables that she grows in her garden.

Samuel Bull, son of the former Whitefish chief with the same name, had a display of arts and crafts made by himself, his wife Doris Collins, and their two children, Samson, 15 and Usani, 11. The family received an honorary award for the preservation of native art.

Many of the traditional arts skills have been passed down through the generations; however, Bull has also explored more modern art forms such as photography, which he studied at NAIT in Edmonton.

“I can remember learning beadwork from my kookum as a young boy,” recalled Bull. He has now blended his rich cultural background with modern photography techniques to produce unique pictures. One picture on display at the Fall Harvest has a silhouette of a couple standing next to a teepee in front of a sunset with the faint image of an eagle in the sky. He explained how he integrated three original photos into the final picture.

Bull also makes traditional hunting knives and is involved in a national knife makers guild in which he shares tips and tricks with other knife artisans across the country.

His wife, who specializes in beadwork, said she chooses colors from nature, such as the beautiful vibrant colors of the sunset, and combines them with traditional designs. Sometimes new ideas come to Collins in dreams or from the spirits during meditation.

COVID cases confirmed at Ashmont School
Oct 18, 2020 7:38 PM
Comments
We welcome your feedback and encourage you to share your thoughts. We ask that you be respectful of others and their points of view, refrain from personal attacks and stay on topic. To learn about our commenting policies and how we moderate, please read our Community Guidelines.