Elisabeth Kirk moved from St. Albert to Mallaig to take on her first year of teaching. She is among a handful of area teachers who have been nominated for the Edwin Parr Teacher Awards.
Mar 26, 2021 12:30 PM By: Janice Huser 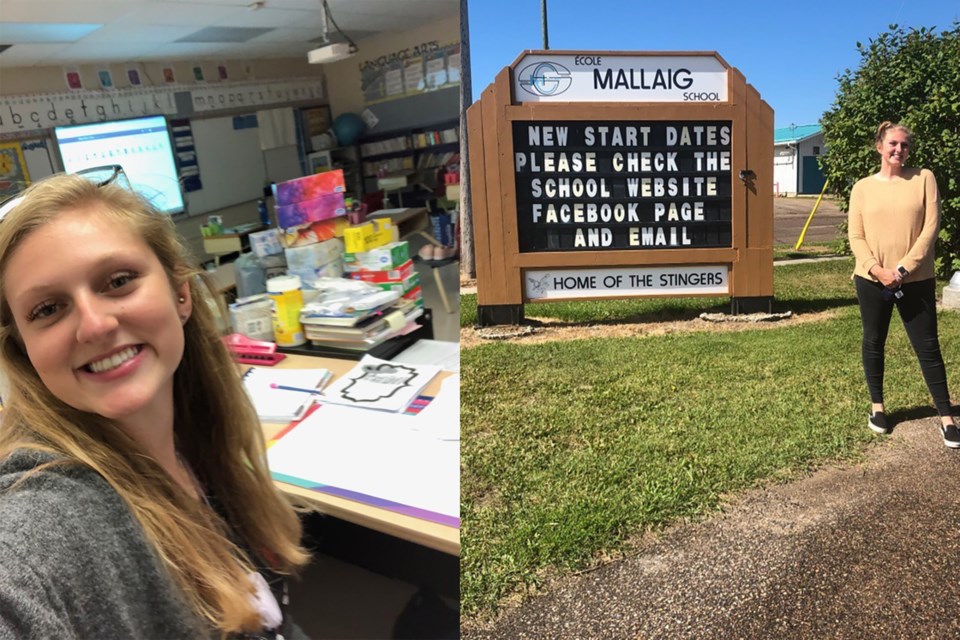 Elisabeth Kirk is among a handful of teachers in the area who have been nominated for this year's Edwin Parr Teachers Award.Photos supplied

MALLAIG - Although Elisabeth Kirk says her initial goal in life was to become a lawyer, it took just one amazing junior high teacher to change her focus.

Now in her first year of teaching, Kirk has found her way from her hometown of St. Albert, to the hamlet of Mallaig, where she is teaching a Grade3/4 French immersion class at the K-12 school. Kirk is among a handful of teachers in the Lakeland who have been nominated for this year's Edwin Parr Teacher Award.

When speaking about her personal experience in junior high school, Kirk says the specific teacher simply made school fun.

“I wanted to go to school and I wanted to learn,” says Kirk. And after that experience, she decided she wanted to give that same experience to other children. While she concedes that “school is not always fun,” she says she appreciated having a teacher that made it fun.

When asked to identity some of the qualities that prompted Kirk's nomination, Mallaig School Principal Kellie Handford described Kirk as being hard working and enthusiastic.

She's an "innovative teacher that exudes confidence and passion for teaching. She is incredibly caring and values the importance of building relationships with staff, students and parents," said Handford. "Elisabeth has vast subject knowledge and she is committed to building a strong French Immersion program within our school. Her awareness to support and include all students with different learning needs is evident in her instruction.”

When asked what brought her from St. Albert to Mallaig, Kirk says with a laugh, "a job posting."

Initially, she had been told she would be able to find a job easily as a French immersion teacher, but with the pandemic and other challenges coming up, Kirk realized there weren't that many jobs available. So, when she saw the opening in Mallaig - and noticed it was within two hours from home - she decided to take a chance.

She says she quickly “fell in love with the little town of Mallaig," but admits she was shocked by how small the community was.

"The community feels like a family,” she says, adding, the entire experience has been great.

And while teaching during a pandemic has it's challenges, Kirk admits that she knows nothing other than what she's experienced so far, and feels confident in moving forward as a teacher.

"I don’t think there could have been a better experience," says Kirk. She is currently teaching a class of 13 students, which is likely a much smaller class than if she had found a job in the city. And, she continues to feel as though her job is manageable and is enjoying every moment of it.

She admits that sometimes what is being planned for class, and what students' needs are on a given day can vary, but she continues to “embrace each new day." She also focuses on realizing and seeing the value of each child in the class.

When asked if she's had any memorable moments that stand out over the past school year, Kirk points to a few moments, but settles on a simple but important part of the school day - recess.

She says anytime she's outside doing supervision and the students ask her to play with them, it's a great moment. Once the elementary students figured out she could touch all the playground equipment and help them get across without touching the ground, they were obviously impressed. Kirk says she gets little notes from her students often, telling her she's a great teacher, which adds to the experience.

The class also had a little birthday part for Kirk this year, since it was her first birthday away from family.

When Kirk found out she had been nominated for the Edwin Parr Teacher Award, she says she was both shocked and excited. Although she had heard about the award in the past, she didn't think much about it heading into her first year.

But, getting the recognition in the form of a nomination from administrators at the school is a good feeling. Kirk offers a thank-you to Handford and assistant principal Yvette Moisey for the support shown throughout the school year, "and the little hamlet of Mallaig, for accepting me in."

Kirk grew up in St. Albert and attended Campus Saint-Jean at the University of Alberta. She says that although learning the French language was more of an academic focus for her - with no other family members in her household speaking French other than her sister - she aims to show students that they can use the second language in many ways.