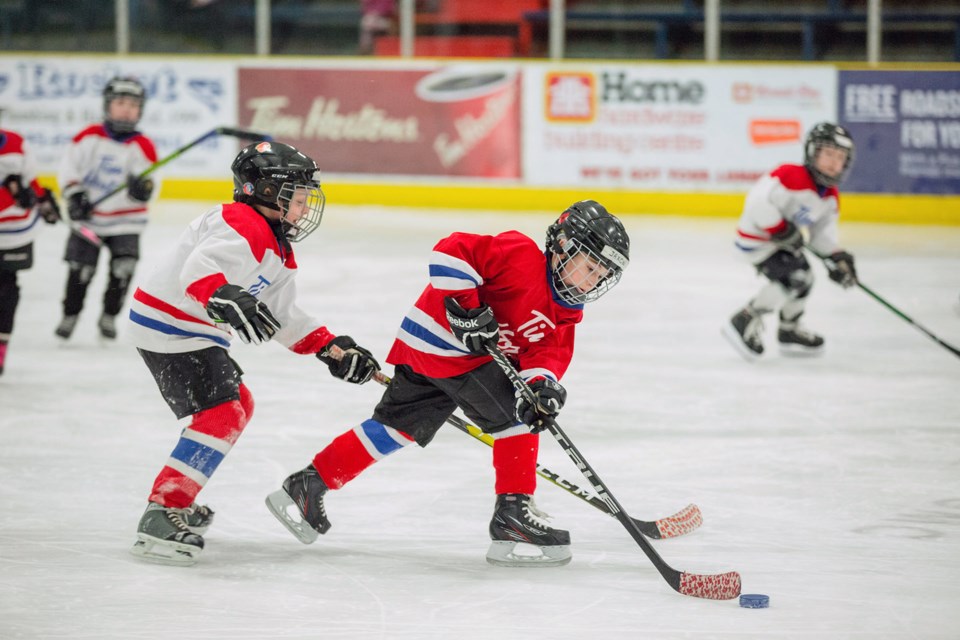 The hockey season is coming to an end early this year, due to measures in place around the COVID-19 pandemic. Pictured are St. Paul Timbit hockey players taking part in the 2020 future all-star game.Janice Huser photo

ST. PAUL - Following the announcement by Hockey Alberta to end the 2020/21 hockey season early due to continued restrictions in place, St. Paul Minor Hockey has made the tough decision to follow suite and terminate the season.

"Over the last months and weeks, our executive (members) have been continually discussing options and scenarios of what the remainder of our hockey season may look like since it was shut down in late November," said St. Paul & District Minor Hockey President Bryce Balmer, in a letter sent out on Feb. 3. "Our discussions revolved around many unknown variables, as you may understand because of the lack of direction or clarity we’ve received from the Province and Hockey Alberta, to date."

While hockey players were able to start the season in early October, players had less than two months of ice time before the province shut things down due to an increase in the number of active COVID-19 cases being seen across Alberta. The announcement initially made in November put a two-week pause on sports, but that two-week period has turned into months for the majority of sports across the province.

Balmer noted that the minor hockey organization was in contact with the Town of St. Paul, as well as other towns, collaborating ideas and efforts to get young athletes back on the ice. While the Town of St. Paul had recently made the decision to shut down the CAP Arena, the cold weather in the forecast would have allowed the arena to be put back into service, had there been better and more timely news on the return to hockey.

"Unfortunately, as of yesterday afternoon, Hockey Alberta officially announced the end of the hockey season for Albertans across all leagues and levels therefore we are to follow suit and regrettably terminate our season as well," said Balmer.  "We now have the task of determining what we need to do for our members in regards to reimbursement of registration fees."

The minor hockey association will have to figure out the costs incurred to date, and determine what percentage of fees will be refunded or credited to its members.

"We have a large membership, therefore this process will require a bit of time, so I ask you to be patient as we figure it out but, as always, if you have questions, please direct them to your division coordinator," said Balmer, in the letter.

"Thank you for your understanding and patience to this point as we collectively navigate these times. I hope you all stay safe and healthy and we hope to see you with your young athletes at the rink in the fall for a fresh and restriction free hockey season," he added.