Cannabis edibles not being regulated in Bonnyville 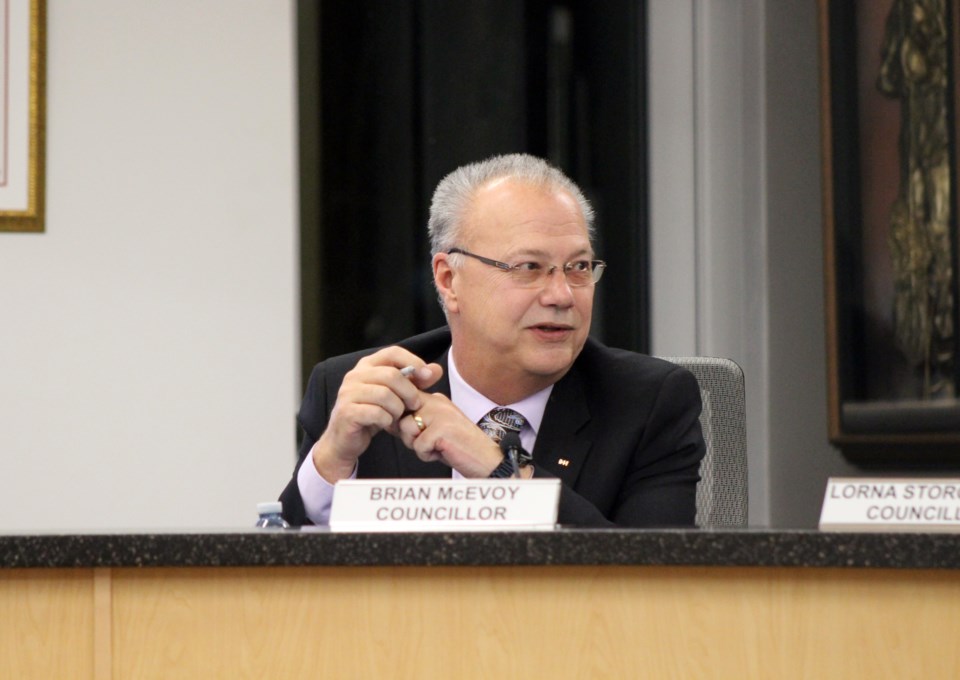 Town of Bonnyville Coun. Brian McEvoy was against prohibiting the use of cannabis edibles, extracts, and topicals in public places in town. Photo by Robynne Henry.

BONNYVILLE – Cannabis edibles, extracts, and topicals won’t be governed the same way as smoking marijuana in the Town of Bonnyville.

Council defeated a motion to create a bylaw that would prohibit cannabis-infused products in public spaces, similarly to the consumption rules for smoking.

The topic was up for discussion after administration received a note from Alberta Health Services (AHS) in January recommending municipalities prohibit public consumption entirely due to safety concerns.

“Our bylaw currently restricts all forms of smoking, and that applies to both smoking and cannabis due to concerns about second-hand smoke,” assistant CAO Bill Rogers said during council’s regular meeting on Feb. 11. “But, it doesn’t deal with edibles, topicals, or extracts.”

Dr. Kristin Klein, AHS medical officer of health for the northeast zone, outlined that AHS suggests implementing more restrictive regulations to begin with that can be lessened in the future.

“AHS advises that a precautionary approach be taken to minimize substance use harms and unintended consequences. This approach recognizes that it’s easier to relax or remove restrictions at a later date than to tighten them after decisions have been announced, bylaws have been enacted, and investments have been made,” she detailed in the letter.

Keeping cannabis out of the hands of those below the age of 18 and protecting public safety was among the reasons AHS listed.

“The location, method, and accumulated volume of cannabis consumption can create a number of concerns, including increased youth access and increased normalization among youth due to increased visibility and exposure. Public consumption bylaws have the potential to protect the community and its citizens,” Klein said.

Before council discussed the subject, it was sent to the policing committee for a recommendation, who agreed with AHS.

“We said we don’t want it being left on a table, if somebody forgets it there and some kid grabs it… If you don’t pass a bylaw, they can do that,” expressed Coun. Rene Van Brabant, who sits on the policing committee.

One argument raised by councillors with prohibiting the consumption of cannabis edibles, topicals, and extracts was enforcement.

“I just have an issue in creating a bylaw that’s virtually unenforceable that nobody has any intention of enforcing just to keep AHS happy. I just don’t agree with it,” Coun. Brian McEvoy stated.

He added, “We’re talking about a bylaw that prevents you from taking (the candy) out of your pocket and putting it into your mouth. It’s not going to prevent anybody from having it, because it’s covered under other laws and regulations. We can’t pass bylaws on that.”

“I can’t see how you’re going to police it. You’re at a restaurant, somebody pulls a candy out of their pocket, how am I suppose to know if it’s a jawbreaker or not?”

Although the consumption of marijuana edibles isn’t currently covered under the town’s laws, someone being noticeably under the influence is.

“Our bylaws do currently allow for the enforcement of individuals that appear to be under the influence or intoxicated in public places, so we have that to fall back on. But, they don’t currently contemplate designated cannabis gardens like beer gardens at festivals and things like that.”

Provincially, the rules surrounding edibles are similar to other forms of cannabis. Someone must be over the age of 18 to purchase and possess it, and can legally have up to 30-grams of dried marijuana or the comparable volume in other forms. According to the Alberta Gaming, Liquor, and Cannabis Commission (AGLC), 15-grams of an edible product is the equivalent to one-gram of dried cannabis.

Another adjournment for Halfe
Feb 26, 2020 7:00 PM
Comments
We welcome your feedback and encourage you to share your thoughts on this story. We ask that you be respectful of others and their points of view, refrain from personal attacks and stay on topic. To learn about our commenting policies and how we moderate, please read our Community Guidelines.