Kilometres for a cure back for second year

Three Bonnyville men are biking 60-kilometres to raise funds for the local cancer centre
Jul 21, 2021 11:00 AM By: Robynne Henry 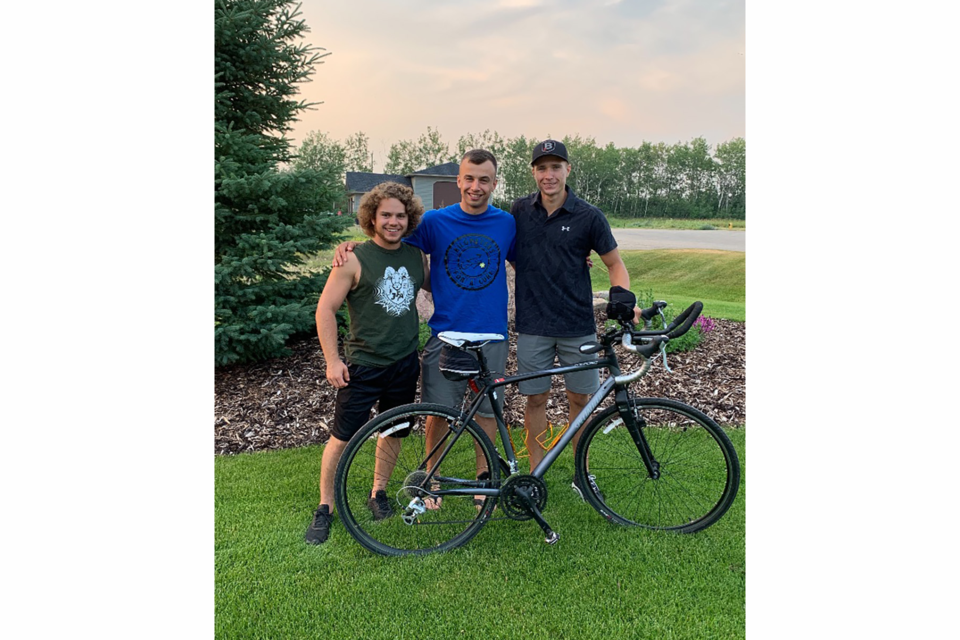 Kilometres for the Cure will be holding their second event to raise funds for the local cancer centre on Aug. 6. Photo submitted.

Organizer Réjean Bourget, along with Daniel Bernier and Scott Thackery, will be representing Kilometres for the Cure, which is a 60-kilometre bike ride starting at Moose Lake and ending at Kinosoo Beach in Cold Lake taking place on Aug. 6.

This is the second time Bourget and Bernier will be climbing on their bikes for the cause.

“We just had a lot of support last year and its hit home for all of our riders,” Bourget told Lakeland This Week. “All of our riders that have joined have had some sort of cancer experience. Not themselves, but their family and friends.”

For Bourget, it all started after watching his grandfather fight cancer.

“That was my first actual close contact with a cancer experience, seeing how it had affected him opened my mind and eyes to the hideousness of this disease,” he expressed. “It’s awful. It really motivated me to want to give back to our community and all the patients in the area.”

That’s why Kilometres for the Cure is hoping to raise $10,000 to donate to the Bonnyville Community Cancer Centre, which will surpass the $8,000 that was raised last year for the Canadian Cancer Society.

Giving back to the community was among the reasons first-time rider Thackery signed up to join Bourget and Bernier this year.

“It’s really nice that we can support our facility with our ride and will continue to help patients when it comes to care and enhancing treatments,” he expressed. “By completing this ride, I know we will be able to help people in our community that are faced with battling cancer.”

The trio has taken a break from training due to the heat but typically bike together in intervals to prepare for the 60-kilometre trek, which builds up their endurance.

“We’ve done some earlier rides but it’s been intervals again. It’s been tough with my riders being at work a lot, but we’re still making time for it and we’re just excited for Aug. 6. We’re stoked,” exclaimed Bourget.

The goal is to beat the heat like they did last year on the day of, heading out as early as possible along the highway.

Kilometres for the Cure won’t just be represented by bikers from the Lakeland area.

Bonnyville-native Isaac Fagnan and his girlfriend, Patti-Anne Tracy, will be participating from Antigonish, NS, while Adrian Kinney will join the ride in Bristol, NB. This is the second year all three have participated.

Bourget has plans to continue Kilometres for the Cure for as long as possible and is aiming to register the event as a not-for-profit before next year. He offered his appreciation to anyone who has offered support to the fundraiser so far.

Anyone interested in supporting Kilometres for the Cure can reach out to Bourget by phone at 587-990-7323 or email rejeanbou@gmail.com.