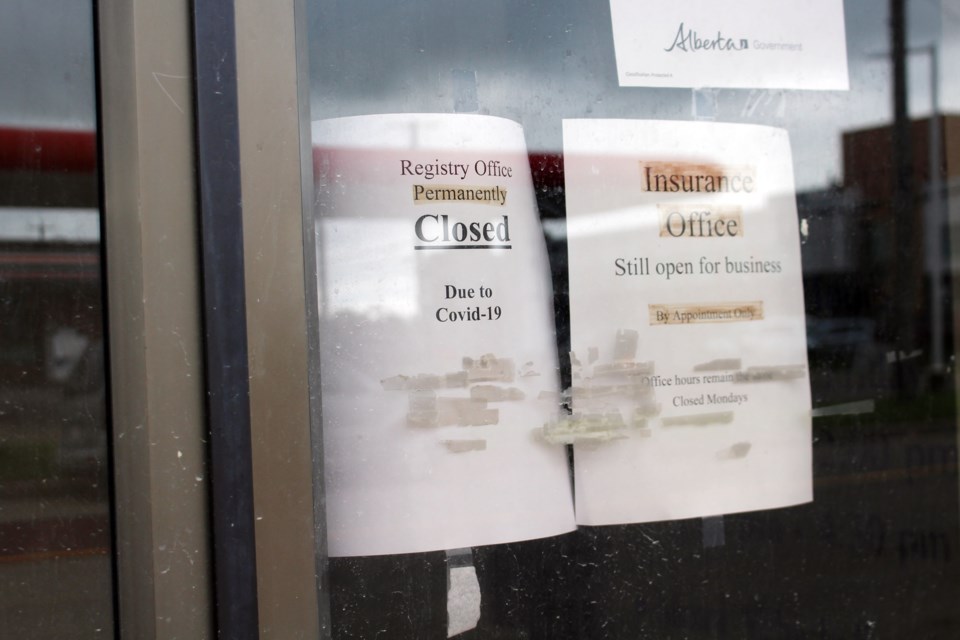 A sign in the former registries office states it has closed permanently due to COVID-19. The province is currently accepting requests for proposals for a new location. Photo by Robnne Henry.

BONNYVILLE – The Town of Bonnyville will have a new registries office, hopefully sooner rather than later.

The Government of Alberta is currently accepting requests for proposals until Aug. 18 for businesses interested in delivery registry services in town after the previous office closed permanently.

A sign in the door of the former registries office states the permanent closure is due to COVID-19.

Local councils and residents have been vocal with their concerns about the previous registries office, which faced a staffing shortage and reduced hours on multiple occasions.

“We had heard multiple complaints from residents in our offices about this and a number of statements from people who said they were having to travel to Cold Lake to get service, which they were very happy with the service there,” explained MD of Bonnyville Reeve Greg Sawchuk. “But, their experience with the local office wasn’t good.”

Earlier this year, town council sent a letter to the province outlining their own concerns and those of residents.

Town of Bonnyville Mayor Gene Sobolewski said, “We had an unending amount of complaints regarding the existing registries office and the lack of services being provided during COVID-19. We wanted the ministry to address it and this came from businessmen, residents, (everyone).”

Tricia Velthuizen, press secretary for the Minister of Service Alberta Nate Glubish, said the request for proposal was opened because there currently isn’t a registry agent in Bonnyville.

“Registries provide many government services to Albertans and Service Alberta has been actively working with registry agents to modernize and improve how those services are delivered,” she noted.

When exactly a new registries office will be open is up in the air at the moment, as the process of finding a suitable candidate will be done once the request for proposals is closed and all submissions have been reviewed against evaluation criteria.

The size of a community and access to a neighbouring registry agent office is among the criteria for an office to be opened, which is reviewed by the province on a case-by-case basis.

“It’s a service that is very well used and the province recognizes that we need these types of services,” exclaimed Sobolewski. “Basically, people leaving town to go to Elk Point, Cold Lake, and St. Paul to get their registry services is just unacceptable for the length of time we’ve been doing it.”

Along with the campaigning from local municipalities, Sawchuk believes “the public coming forward and expressing their displeasure made the difference.”

“We’re glad that the people spoke up because we had brought this forward to the service minister nearly two years ago when he came out and he was doing his tour, it was brought up in the Bonnyville and Cold Lake meetings and looking for some changes there and nothing had happened,” he recalled. “Finally, enough people got the minister’s email address and were able to get the comments to that office where it made a difference.

"In this case, we really have to applaud the people who took the time to write their letters and send them off to the government because sometimes if it's just a single municipal voice venting, we don’t get a reaction but when they’re inundated with the public sending these things in, then, in this case, we saw some movement.”

Sobolewski noted it was a “very concerted effort.”

“I know the public played an integral role, but I think ourselves and the MD pushed pretty hard as well. There were a lot of other esteemed businesses, former MLAs, and that sort of thing that were part of it as well.”