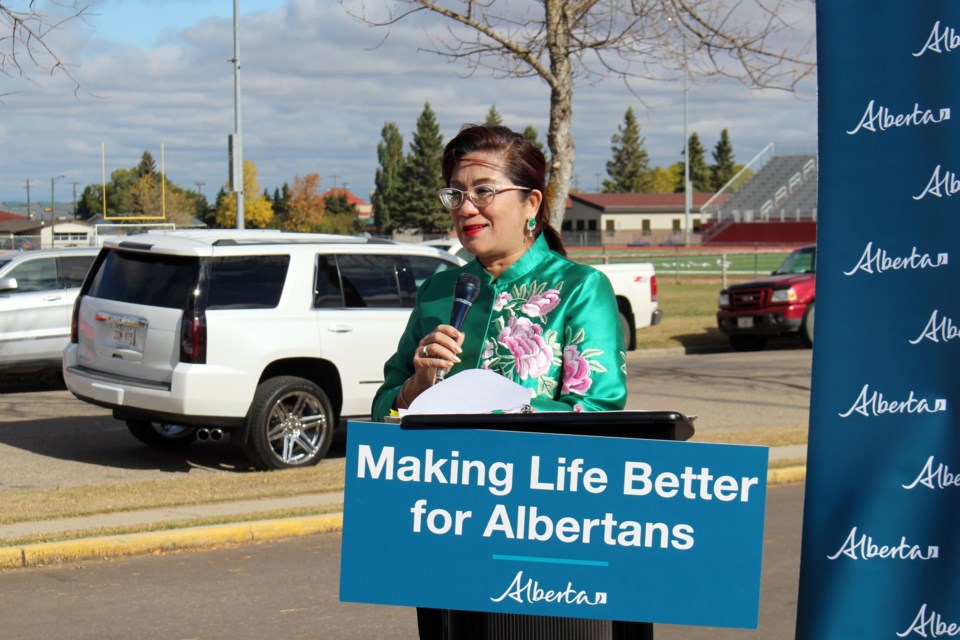 Seniors and Housing Minister Josephine Pon made a visit in Bonnyville on Sept. 30 in honour of the Bonnylodge construction completion. Photo by Robynne Henry.

BONNYVILLE – The third and final phase of the Bonnylodge renovations is reaching its final steps.

On Sept 30, Seniors and Housing Minister Josephine Pon joined councillors from the Town and MD of Bonnyville, former and current members of the Lakeland Lodge and Housing Foundation for a press conference and a tour of the newest wing of the Bonnylodge.

With the new addition, there will be 121 rooms in the lodge that will accommodate approximately 130 people.

“The foundation identified a need to revitalize and increase our seniors' housing in Bonnylodge and Cold Lake Lodge in 2009,” said Lakeland Lodge and Housing Foundation chair Chris Vining. “After working with Seniors and Housing, we secured funding and our vision of modernizing our lodges and increasing our senior housing units for the area was accomplished. A big thanks from our foundation and seniors to the many people involved in overseeing these projects to a successful ending.”

Prevost, who’s the vice-chair of the Lakeland Lodge and Housing Foundation, anticipated that people could be moving in as early as Nov. 15.

Shovels were in the ground for the first phase of the Bonnylodge project in 2012. That portion saw 22 lodge beds and 30 compartments added, and the east side of the building had an additional 30 apartments added during the second phase.

The final phase officially broke ground in May of 2019 and saw a few delays due to weather and the coronavirus pandemic. It added 46 rooms to the lodge.

The government of Alberta footed the $35.5-million bill for the Bonnylodge project, with phase three coming in at $13-million.

Mayor Gene Sobolewski stressed the hard work that was put in by the members of the Lakeland Lodge and Housing Foundation from 2009 to make the construction a reality.

“Not only for phase one but then for phase two and for this particular phase. I really want to credit the tenacity of the board and the councils to collaborate together on this particular project,” he expressed. “But, also the collaboration and cooperation we received from the province of Alberta. It was a lot of different governments, ministers, and individuals that we had to work with so I want to thank them all for that.”

The expansion offering more affordable housing for seniors was a positive for Pon.

“As the minister of seniors, the first thing I want to see is how do we make seniors more comfortable,” she said. “We know that most seniors when they retire, they love to stay in their own community. They want to stay close to their family and friends… It’s very important that we do something for seniors to keep them close to their homes.”

Pon also made a stop in Cold Lake on Sept. 29 in honour of the Cold Lake Lodge. That project involved the partial demolition of the lodge and construction of a new stand-alone facility that makes 61 more housing units available to seniors.

“This beautiful facility is the result of passionate work by the Lakeland Lodge and Housing Foundation and crucial support from the Government of Alberta,” stated City of Cold Lake Mayor Craig Copeland. “It will serve our region’s seniors well into the future, and stands as a strong commitment to supporting those who have helped to build our community, our region, and our great province.”

The governments of Alberta and Canada jointly contributed $16-million for the Cold Lake development.

MD of Bonnyville council asks questions about RCMP services
Oct 20, 2020 9:00 AM
Comments
We welcome your feedback and encourage you to share your thoughts. We ask that you be respectful of others and their points of view, refrain from personal attacks and stay on topic. To learn about our commenting policies and how we moderate, please read our Community Guidelines.