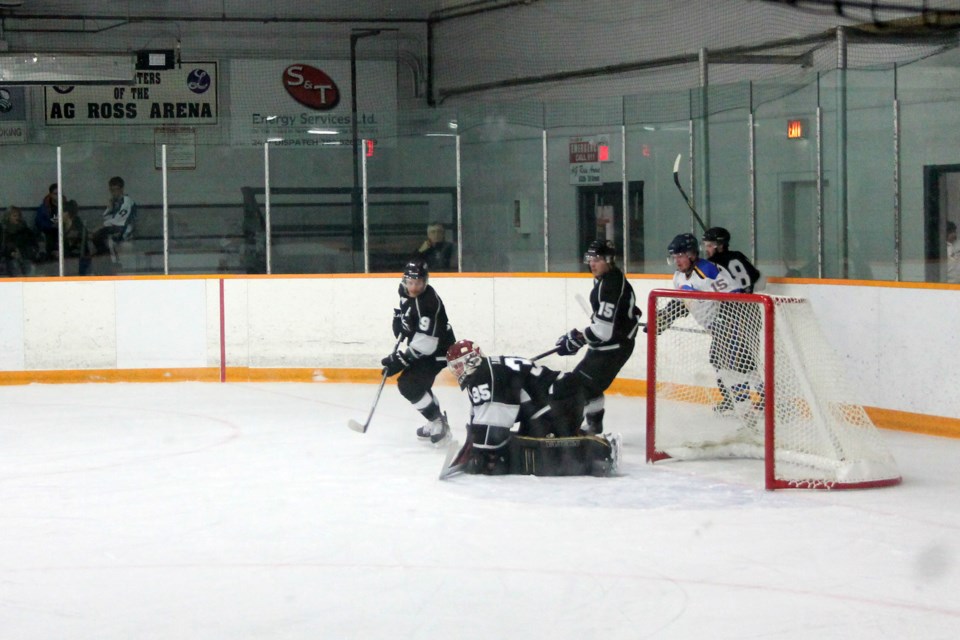 Elk Point Elks are ready for another, although very different, season in the West division of the SaskAlta Hockey League. Pictured is a shot from the team's 2019 home opener. This year's version will take place Friday night at 8 p.m. at the A. G. Ross Arena.

ELK POINT - They may not have all of their usual competition on the schedule, but the Elk Point Elks and their fellow teams in the SaskAlta Hockey League will see a modified season, despite the ongoing pandemic, under conditions put in place by Alberta Health Services (AHS).

“This year with COVID19, we are not allowed to play interprovincial games, so the SaskAlta Hockey League has been divided into the two divisions, and the Elks will be playing the Alberta teams,” Wanda Cochrane reported after a league meeting on Thursday.  “Our first game is on Friday, Nov. 6, which will be at home against the Paradise Valley Jets, then we'll head to Paradise Valley on Saturday, Nov. 7.  According to AHS, we then have to have a 14-day regroup before we can play again.”

Being restricted to back-to-back games against the same team and a minimum 14-day period between games, a stipulation that also applies to Alberta’s minor hockey teams, Cochrane says this means that, “We will only have five home games before playoffs.” The remaining home games will be on Saturday, Nov. 28 against Kitscoty Monarchs, Saturday, Dec. 19 against Dewberry Mustangs, Friday, Jan. 8 against Wainwright Rustlers and Friday, Jan. 29 against Two Hills Longhorns, with the return games against those teams on the same weekend.

For all the home games, Cochrane says, “Puck drop will be at 8:00 p.m., our fans will have to sign in at the arena when they enter and we are limited to 100 fans.”  Admission fees have increased slightly this year, to cover costs, but children under six still get in free. Another change for the 2020-2021 season, she notes, is that “50/50 tickets will be sold, but only at the door; our volunteers will not be allowed to walk around the arena selling them.”