Elk Point will play host to a drive-in concert on May 8, featuring Aaron Pritchett. The event will raise funds and awareness around organ donation.
Apr 21, 2021 6:30 AM By: Vicki Brooker 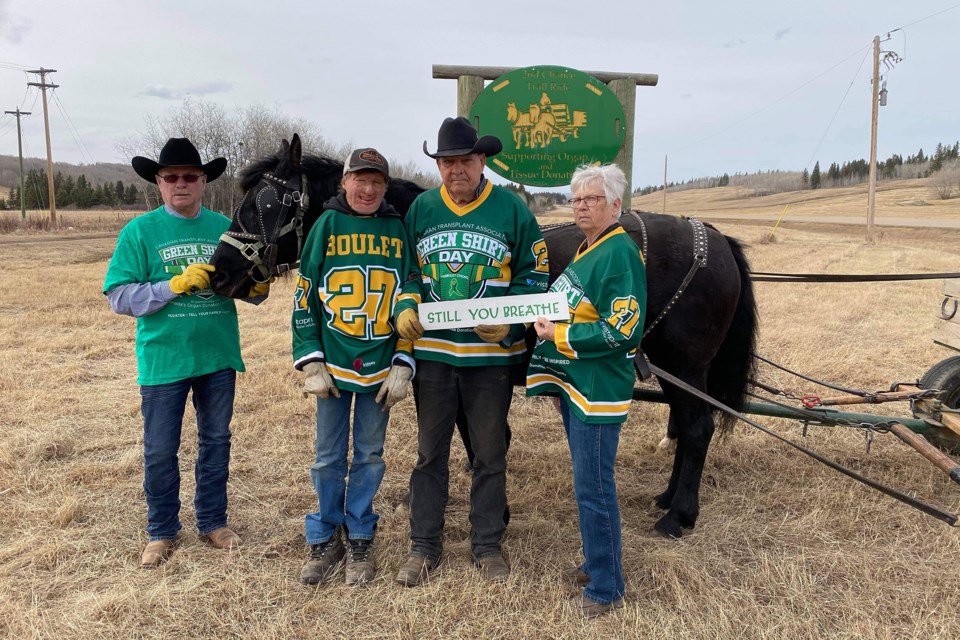 ELK POINT – “Still you breathe, you’re a part of me…” says the song recorded by Aaron Pritchett and Ray Mussell, telling the story of a life truly given a second chance due to donated organs.

Many people across the country have received organs donated by the families of those who had signed their donor cards, and the story of one of these recipients inspired a friend of his family to create a song inspired by his journey back to health.

Sheila Moore is a friend of the family of double lung recipient Morris Irvine of Lindbergh, who along with fellow double lung recipient Tom Matthews, dreamed up the idea of celebrating their journey back to health with the first-ever 2nd Chance Trail Ride back in 2012. That first small trail ride on the Iron Horse Trail grew every year, with a record 345 participants in 2019, raising increasing amounts of donations to both spread the word of the need for donor organs and to assist other recipients in their transplant journeys back to health.

Moore, founder of Sturgeon County-based Morcomm PR & Events, was so inspired by Irvine’s story that she shared her ideas with Ray Mussell of Mussell Records to turn it into a song, by Mussell and Canadian country music star Aaron Pritchett, ‘Still You Breathe,' released on Green Shirt Day, April 7.

The Irvines and Toby and Bernadette Boulet, parents of Humboldt Broncos bus crash victim Logan Boulet whose organs saved six lives, were treated to a preview of the song on March 14.

Moore already had her ideas for the song ready when she contacted Mussell last October, and said in a recent press release, “Fortunately, he was inspired and agreed to take it on. I sent over my draft and we started to work together. It has been a great experience. I am incredibly grateful to Ray, Aaron and everyone involved.” She added that Mussell also composed the music and funded the project.

“I’m so glad we did this, we experienced very profound emotions recording this song in the studio,” Mussell said of the song’s message, outlining the powerful perspective of gratitude that a transplant recipient feels toward the donor and that sends a heartfelt message to donor families.

Pritchett was also happy to be involved in the project.

“It’s been a tough year for many people, and even if I’m not performing and getting out with my fans, I’m thankful to still be creating music. This special track inspired all of us in the studio and the stories we’ve heard along the way have been incredibly special. I am honoured to be part of this, and I hope this song will enhance the momentum of the work that is being done to generate awareness about organ donation.”

‘Still You Breathe’ was produced by Mussell and Pritchett, with his son Jordan Pritchett and fiancée Danielle Marie King of the dynamic duo Cross Parallel providing background vocals, at Bryan Adam’s Warehouse Studio in Vancouver in late January.

The song is now being heard on radio across the province, but it will be heard in person at Elk Point on Saturday, May 8, when the drive-in Tunes & Tailgates concert will feature Pritchett, Mussell, Cross Parallel and Alberta rising star Chantelle Mussell, and will raise funds to further the tireless efforts of the 2nd Chance Trail Ride Society.

‘Tunes & Tailgates’ will wrap up a day that begins with the socially distanced 10th Annual 2nd Chance Trail Ride, which leaves the Lindbergh staging area that morning starting at 11 a.m. for its journey up the scenic Iron Horse Trail to Elk Point, ending at the Elk Point Riding Arena.

Trail Ride going as planned, concert rescheduled due to restrictions
Apr 29, 2021 11:00 AM