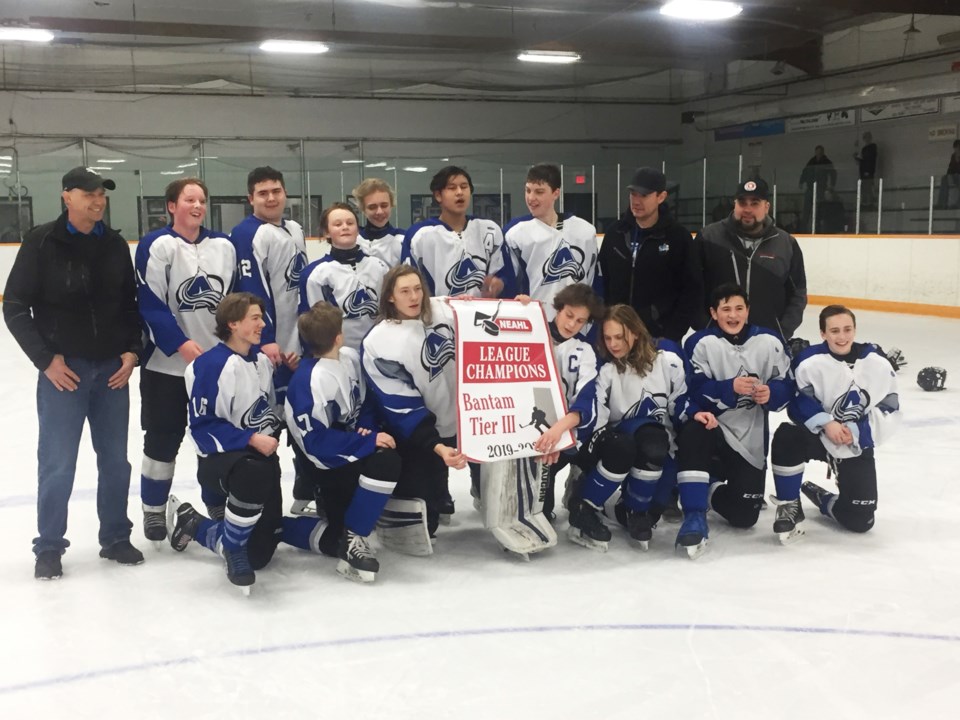 Elk Point Bantam Avalanche celebrates their North Eastern Alberta Hockey League championship win over Onion Lake Border Chiefs on Friday night, which moved them up from Tier 3 to Tier 4 and sends them off to Provincials in Edmonton. Melissa Rogal photo

As the top two teams at the conclusion of the NEAHL schedule, the Avalanche and Border Chiefs were required to play off to move up a tier, the league not having a Bantam Tier 3 this year. The Avalanche headed to Onion Lake Arena on Thursday evening for the first game of the best-of-three series, where Jager Fontaine racked up five goals, Sam Rogal a pair and Josef Theriault a single to wrap up the game with an 8-2 score in favour of the Avalanche.

Friday night saw the Avs and Chiefs face off at the A. G. Ross Arena in the second game of the series, with Fontaine continuing his winning streak with two goals in the first period, before the Chiefs were able to sneak the puck past Avs goalie Vanden Moroziuk. Dean Ockerman would add one more to the tally before the first intermission.

The Avalanche entered the second period with a 3-1 lead, but Jager hadn’t had enough scoring yet, adding his hat trick goal, unassisted, within the first five minutes of play, before both goalies shut the gate on scoring for the 34-plus minutes remaining in the game, the Avalanche winning this one 4-1 to take the North East Amateur Hockey League Tier III banner in two games straight.

The NEAHL summary of the season shows that Avalanche finished the season undefeated, with 20 wins, no losses or ties, 11 points ahead of the second place Border Chiefs, who had 14 wins, two losses and a tie. They also had twoplayers in the top five, with Jager Fontaine the league leader with an incredible 70 goals and 46 assists, and his brother, Kade Fontaine in fourth place with 31 goals and 26 assists.

Vanden Moroziuk topped the list of goalies, stopping an incredible 237 of 261 shots in the regular season and recording an impressive number of shutouts.

New Peace Officer training program coming to Portage College
Mar 30, 2020 3:29 PM
Comments
We welcome your feedback and encourage you to share your thoughts on this story. We ask that you be respectful of others and their points of view, refrain from personal attacks and stay on topic. To learn about our commenting policies and how we moderate, please read our Community Guidelines.