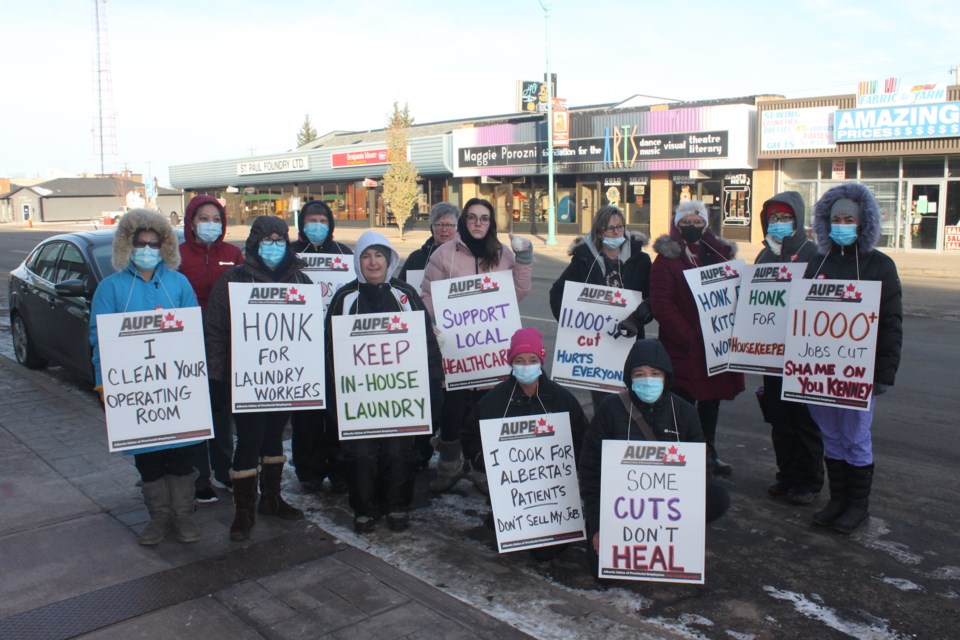 “Anger has been building among members for months,” said Guy Smith, president of the Alberta Union of Provincial Employees (AUPE). “The recent announcement by Health Minister Tyler Shandro of 11,000 jobs being cut in the middle of a global deadly pandemic was the last straw for them.”

Smith said health care workers had “no other option but to fight to protect Albertans at risk, especially during the deadliest pandemic in a century. By constantly short-staffing public health care, this government is pushing our members to the breaking point exactly when Albertans need them most.”

He accused the government of causing “widespread chaos in our healthcare system — the responsibility for this lays squarely at his feet. His illegal acts started before the pandemic and he has persisted in the face of mounting opposition and public concern. The UCP must stop this deliberate attack on public health care and get back to the table with frontline healthcare heroes.” 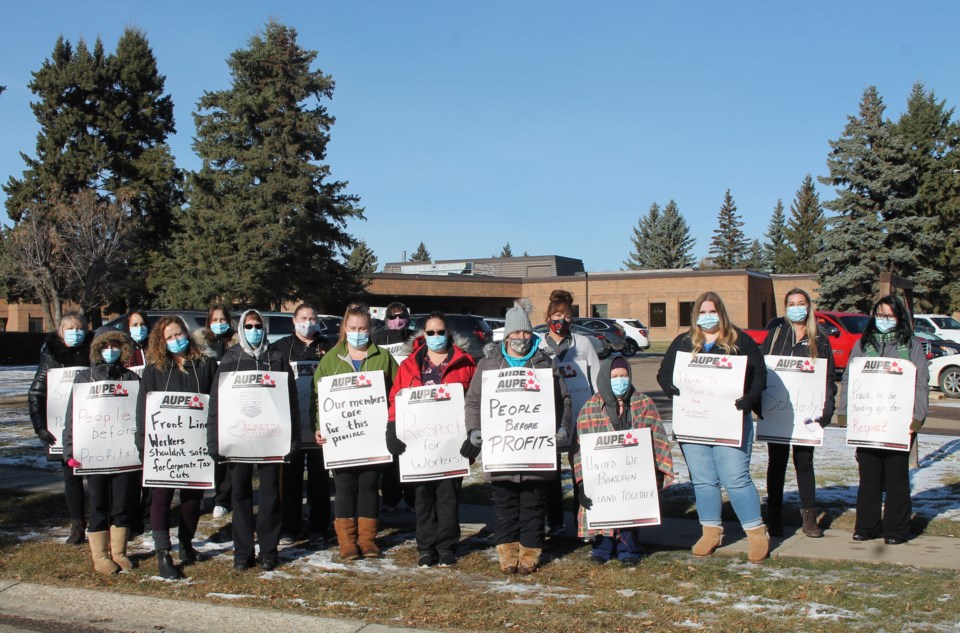 Elk Point Health Care Centre’s front line workers joined the staff of other health care facilities across the province on Monday to voice their concern over the recent announcement by Minister of Health Tyler Shandro that 11,000 healthcare jobs would be cut, in favor of privatization of housekeeping, dietary and laundry services. Vicki Brooker photo.

In St. Paul, striking workers took their protest to the streets at 9:30 a.m. with many motorists honking their support as they drove by.

“We don’t want to leave patients unsafe so we are making sure that anyone who is in surgery right now is taken care of and at that point no additional surgeries will continue,” she said.

“We are making sure that we are keeping one housekeeper in the building – it is a pandemic. So, high touch cleaning, infection control, emergency cleaning – that’s also still covered. But no one’s making your lunch right now so I don’t know what they are going to do. No laundry – it’s just piling. No one is going to be making beds, doing discharge cleans.”

Asked if the strike would extend beyond Monday, Vorstenbosch, who is the working lead for environmental and linen services, said Premier Jason Kenney has “told us we are not essential. He’s told us we’re not frontline, that we are expendable and we can be sold to the highest bidder, so we have to see what Jason Kenney thinks.”

If AUPE does not issue a return to work directive for its members, she said the local picketers will continue with the strike tomorrow.

St. Therese Health Centre laundry workers received official notice Friday that their job had been put out to tender.

“It will be a truck from a factory in Edmonton that will process the linen and deliver it here. There will be no work for the St. Paul workers – some of them have been here 30 years.”

Most of my staff are single moms, new to Canada, supporting many members of their family, working multiple jobs just to pay the bills now. Housekeeping, laundry and dietary workers are the lowest paid Alberta Health Services staff and that’s the ones they want to privatize.”

She said morale in the facility is “extremely” low.

“We were told at the start of this pandemic, particularly housekeeping – we are frontline, we are infection control, we are the ones that are going to keep patients and staff safe – ‘you are absolutely essential we need you’ and then to be told “you’re not frontline, you’re not essential and we can sell your job to any company that’s got the lowest bid – that’s how important you are to us’.”

Vorstenbosch said the premier “needs to recognize what is public health care – it shouldn’t be sold to the lowest bidder.”