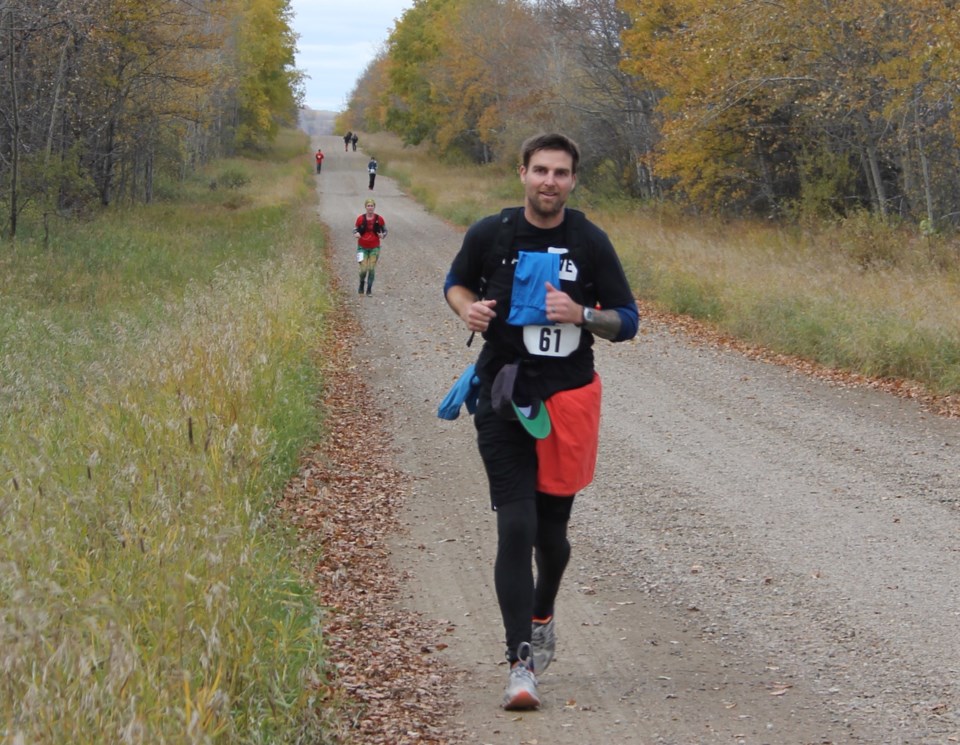 Part of the Alberta Ultra Series, participants test their mettle on either a 100 kilometre or 100 mile route, following the Iron Horse Trail for the most part, but also crossing through private land along the way. The marathon takes runners from St. Paul through the Moose Hills, into Elk Point, out to Fort George Buckingham House Interpretive Centre, along the North Saskatchewan River, through the Lindbergh area and back around to St. Paul.

“The benchmark of ultras seems to have always been the hundred miles, so we wanted to develop a race that had that,” organizing committee spokesman Ben Poulin said. “What is unique a little bit about ours that we like to advertise is that we are a non-repetitive course, meaning you don’t run the same loop over and over again.”

With some courses having a 25-kilometre or only a 10-kilometre loop, “you can imagine the monotony of doing that,” Poulin said, whereas, the Iron Horse Ultra takes runners on a “true hundred-miler.”

While the route is a big undertaking for the organizing committee and volunteers, especially in terms of logistics, Poulin said the marathon, now in its twelfth year, is appealing to runners and keeps many of them coming back year after year. Participants have come from all over the world to participate including New Zealand, Wales and South America.

Athletes pushing themselves to such extremes is not without risk. Last year’s event ended tragically with the death of local marathon runner Tom Starosielski who collapsed on the course. While reviews following the incident, described as a medical episode, indicate it was out of anybody’s hands, Poulin said Starosielski’s death is something that continues to haunt him.

“What happened last year goes through my head every day and I’ve come to terms that there’s nothing more I could have done. We’ve assessed and reassessed where we can have improvements.”

Asked about the competitiveness of marathon runners, Poulin said while there is certainly a competitive edge to the sport, ultimately, it is more about finishing the race, helping other runners finish the race and the experience, rather than crossing the finish line first.
“There are times when one guy wants to tap out and a buddy will keep him going and then the opposite will happen later down the road where the guy that was struggling is now taking on a more dominant role and it’s his running mate that needs a bit of support. You see that constantly with these races.”

However, Poulin said when you put a time limit on anything, there’s bound to be an ounce or two of competitiveness kicking in at some point along the way.

“Runners that know each other well will fall into pace and at time will push each other in a competitive way but it’s more in a friendly aspect.”

Poulin was the trail supervisor last year and didn’t compete and so is looking forward to participating this time around.

“Two years ago, I did the 100 kilometres so I feel the need to go for the big one this time . . . Believe me, when I crossed the finish line after 100 kilometres there was nothing in my brain that said there was any use in going any further and this year I’ve signed up for any extra 60 kilometres on top of that.”

The number of participants is capped at 100 this year as per Public Health protocols. If things open up further, the number could change down the road. There will be no relay teams this year, only solo runners, age 16 and up, can participate. About 75 runners have already registered. People can register at Ironhorseultra.com.

A 70-plus volunteer corps is needed to pull off this marathon from marking the trail beforehand, to assisting during race time and then dismantling everything when the event is completed. Start time is 7 a.m. on the Saturday morning with the 100-kilometre runners having 20 hours to finish and 100-mile runners being given 27 hours to finish.