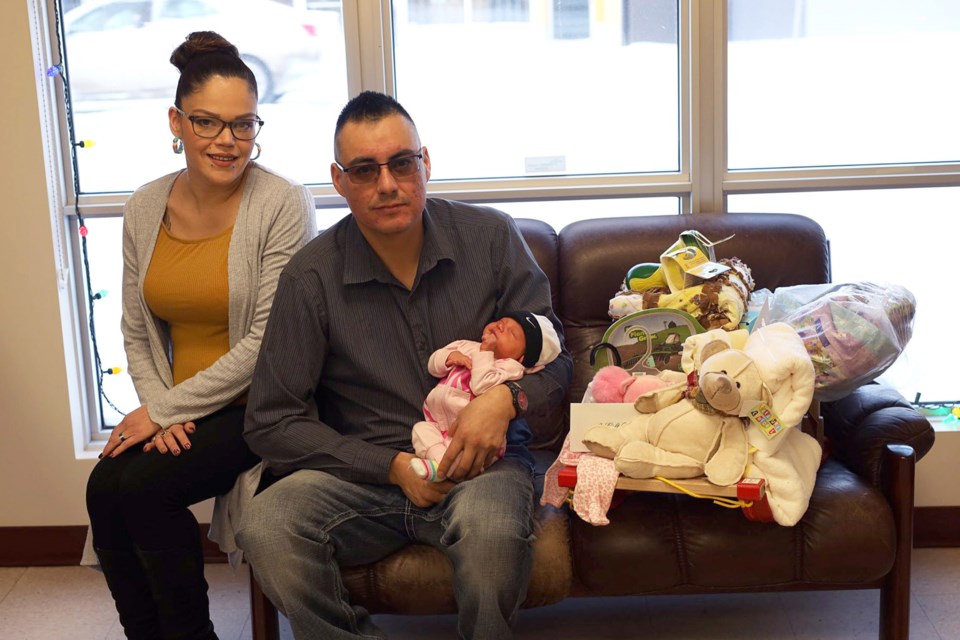 Rochelle Houle (left) and Aaron Bull welcomed their daughter, Aarolee Houle-Bull on Jan. 1 at the St. Paul hospital. Aarolee is the first baby to be born at the local hospital in 2020. The family accepted a bundle of gifts donated by local businesses.

Rochelle Houle and Aaron Bull welcomed their second daughter together at 10:35 p.m. on Jan. 1 at the St. Therese - St. Paul Healthcare Centre.

While she is a bit confused by her new baby sister, Rochelle says Amriel has been sweet with baby Aarolee, hugging and kissing her often.

While becoming pregnant so quickly after the birth of Amriel was a surprise to the couple, overall Rochelle says her pregnancy was normal. Aarolee even arrived almost exactly on schedule, with her original due date set for Dec. 31.

Rochelle explains that it's a running joke between friends that if you want to have a January baby, you simply need to attend Native Hockey Provincials in April, an even that both Rochelle and Aaron volunteer at.

Every year, businesses in St. Paul donate a variety of items to celebrate the new year's baby.

Rochelle and Aaron are from Whitefish (Goodfish) Lake.

Blue-green algae advisory issued for Moose Lake
Jul 6, 2020 5:09 PM
Comments
We welcome your feedback and encourage you to share your thoughts. We ask that you be respectful of others and their points of view, refrain from personal attacks and stay on topic. To learn about our commenting policies and how we moderate, please read our Community Guidelines.