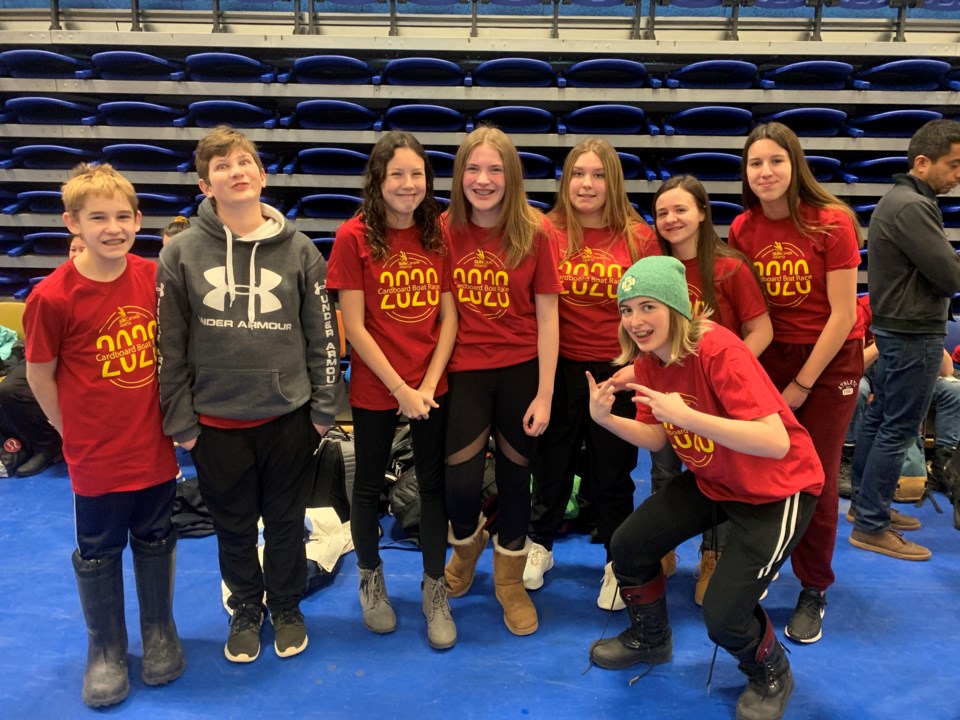 Students from École du Sommet went to Edmonton to compete in the Northern Cardboard Boat Race.

A sheet of cardboard and some duct tape was all some École du Sommet students needed to place near the top at the annual Northern Cardboard Boat Race.

Junior and senior high school students from across the province put their skills and imagination to create cardboard boats that would carry passengers, sail and sometimes dramatically sink. The race, organized by Skills Alberta, took place on Feb. 3 in Edmonton at the Northern Alberta Institute of Technology. Over 520 students participated in the Edmonton, Calgary and Red Deer races.

Alain Mahé, the principal at École du Sommet, brings students to the event each year. The school has been participating for the last 10 years.

“This is a fun event that touches on a lot of different aspects that students learn in class and is a real-world application of knowledge and experience,” Mahé said. “It is a great opportunity to compete against and meet other students from across the province.”

The students designed, constructed, and raced a cardboard boat across a swimming pool, where their boats were also judged on criteria including design, construction, safety, speed across the pool and weight capacity.

The junior team won awards in the fastest speed and floating for a minute category.

“Their limited resources, building space, and time make for creative designs that all the teams are able to test in the water,” Mahé said. “There was a lot of energy and enthusiasm all day from all the teams present.”

The challenge, open-ended and problem-solving in nature, involves design, research, and presentation, including principles of structure, strength, rigidity, and teamwork, according to Skills Alberta.

All participants were expected to prepare their design ahead of the competition.

For junior student Kyle Morais-David and senior student Melanie Jubinville, both of whom are returning participants, the competition was all about having fun.

Jubinville, a Grade 11 student at the school, took part in the challenge in Grade 8 and 9 but was unable to attend last year’s race because the school couldn’t form a team.

“So, this year I tried my best to recruit people and we ended up going,” she said.

In previous races, Jubinville said she would normally take the approach of trying to complete the race and pass the weight challenge.

“But this year I was like, why don’t we just sink the boat because there is an award (Titanic Award) for sinking the most dramatically and go for looks instead?” Jubinville said.

Her team was inspired by the idea of bathtubs and designed a boat with a hole.

“The water came flooding in and the boat physically sunk.”

The boat had to last 10 seconds in the water without sinking to qualify for the award, which it obviously did.

Meanwhile, for Morais-David (Grade 9) and his team, one of the challenges was trying to make a boat with just one sheet of cardboard and incorporating layers, while working through each teammate’s idea and deciding what would work best.

“Last year, we made a good design but it wasn’t really strong,” Morais-David said. “This time we decided to make it more stronger with less cuts and more folds.”

Because cardboard is thin, it tends to bend easier if enough layers aren’t added.

“It’s quite impressive what cardboard can do and only certain designs work in water.”