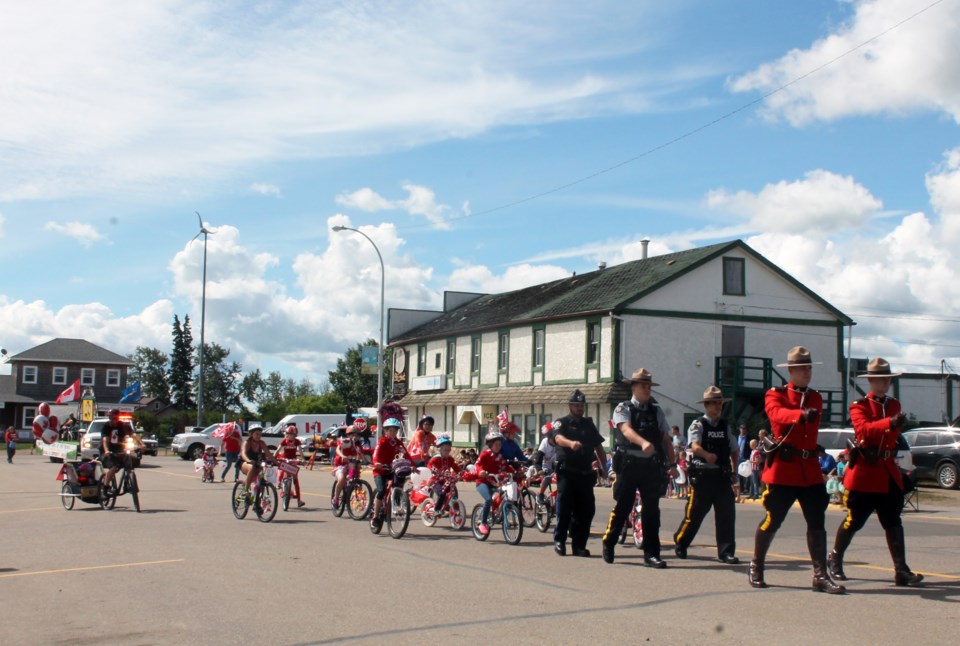 Canada Day in Elk Point will not be the same this year, with the COVID-19 epidemic causing cancellation of the 2020 celebration, from pancakes and parade to the fireworks finale. Vicki Brooker photo

ELK POINT - Sit back and take it easy, Elk Point – you won’t need to fit a whole lineup of late spring and summer events into your calendar.

Elk Point town council agreed at its April 14 meeting that all public events, from the Seniors Week pancake breakfast to the annual Auto Club Show and Shine to the Canada Day events would be cancelled until further notice.

“Maybe this is the year we just can’t do it,” Mayor Lorne Young told council. “We don’t want to bring together people from all over the area.”  Council agreed the cancellation should be declared at this time so organizers could attempt to get back the deposits made on performers, fireworks and attractions for events such as Canada Day, and asked administration to reach out to the affected organizations to inform them of the decision.

“It would probably be the end of August or September before we could have events like that,” Coun. Tim Smereka commented, noting that minor sports have also been cancelled. “The writing is on the wall.”

Elk Point playgrounds were officially closed to prevent the spread of COVID-19.

Council had planned to list three properties the town now owns due to unpaid tax arrears, but under the current conditions, will defer the decision to the first meeting in August.

All three readings were given to a revised Recreation and Cultural Board bylaw, adding a voting member from the County of St. Paul council to the board, and allowing the county’s Director of Community Services to attend meetings in an advisory capacity.

Elk Point Municipal Library Board’s new bylaws were approved by council, who noted that the library board now does their own audit and review.

It’s a while until Christmas, but council voted to close the town administration office and public works department from Dec. 24 to Jan. 1, inclusive. Employees will have one paid ‘floater’ day between Christmas and New Year’s, and unless they have  vacation days, banked time or overtime available, would have unpaid days off during that week.

A portion of the Council and Appointed Members’ Remuneration Policy regarding events covered by the monthly honorarium, was amended, with ‘Attendance at community functions and events’ changed with the addition of ‘with the exception of by a resolution by council’ to cover events where members of council could be paid if they work long hours at such events as pancake breakfasts or Canada Day events.

Council agreed to enter into an agreement with Servus Credit Union and Muniware to streamline processing online payments, freeing up office staff for other duties.

Approval was given to sending a letter of concurrence to MCSnet regarding a proposed internet tower upgrade in the industrial park.