Giant swing to be added to Kinosoo adventure park plans 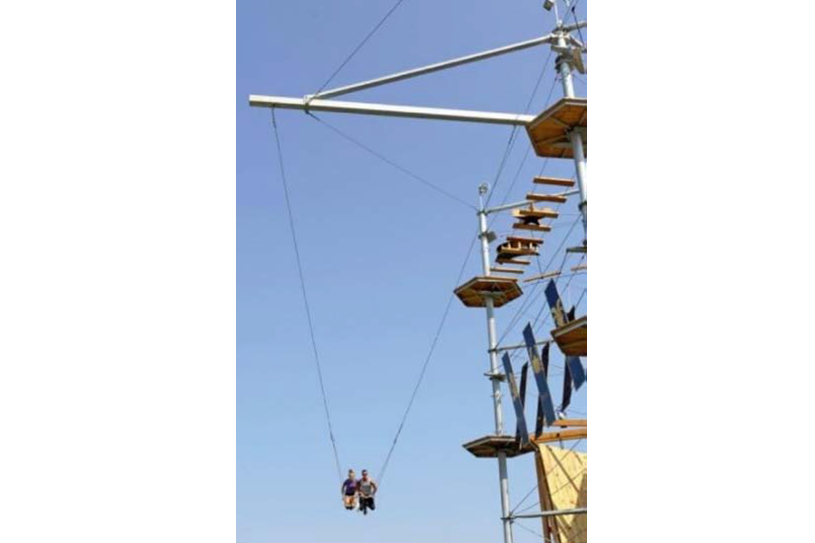 A giant swing will be added to the plans for the Kinosoo adventure park.Photo supplied

BONNYVILLE - A giant swing, also known as a sky swing, will be added to the plans for the new aerial adventure park at Kinosoo Ridge.

During a meeting held on Jan. 6, M.D. of Bonnyville council agreed to proceed with the addition to the plans, as long as it still allowed for future expansion to occur.

The cost of the swing is estimated to be $75,000, plus $10,000 for regulating authority, and an additional $3,000 annually for ongoing operating costs. The costs will be funded from 2021 unrestricted reserves.

Council agreed that the sooner the motion was made to proceed with the sky swing, the better it would be as plans were already in the works for the adventure park.

Coun. Marc Jubinville said his only concern was that the swing be placed in an area that wouldn't prohibit future expansion, or result in work being done twice when an expansion occurs.

"I'll be the first to try it," said Jubinville, as he laughed and affirmed that he was in favour of the swing.

The swing will be included in Phase 1 of the development of the adventure park. More information about the park, such as the shading options on the event platform, colour and trail pathway to the chalet will be presented at the Jan. 13 council meeting.

The giant swing is suspended below a cantilever beam mounted on the third level of the adventure park. A separate tower is also constructed with an electric cable winch. The winch pulls the swing up to an angle of 50 degrees, where the guest releases the swing.

The swing is expected to have a capacity of 40 participants per hour, according to information presented at the council meeting.

In December, council discussed the final touches for the Kinosoo Ridge adventure park, which is expected to open in 2021.

The adventure park is anticipated to attract between 3,000 and 6,000 visitors within the first year of operations.

Following the discussion about the giant swing, Caroline Palmer, General Manager of Planning and Community Services with the M.D. of Bonnyville, offered a brief update on Kinosoo Ridge

She noted that things have been very busy at the ski hill over the holiday season.

Reeve Greg Sawchuk said he had been out to Kinosoo Ridge for some tubing recently and heard positive feedback about the facility being open during the COVID-19 pandemic. He acknowledged there had been some busy days at the hill, which is a worry.

Palmer said there were up to 1,000 people on the hill at once during the holidays some days, and she wouldn't want to see much more than that. She commended the staff at the ski hill for their ability to make on-the-spot decisions as they deal with measures in place due to the COVID-19 pandemic.

"Their decision-making is very sound," said Palmer, when speaking of the managers at Kinosoo Ridge.