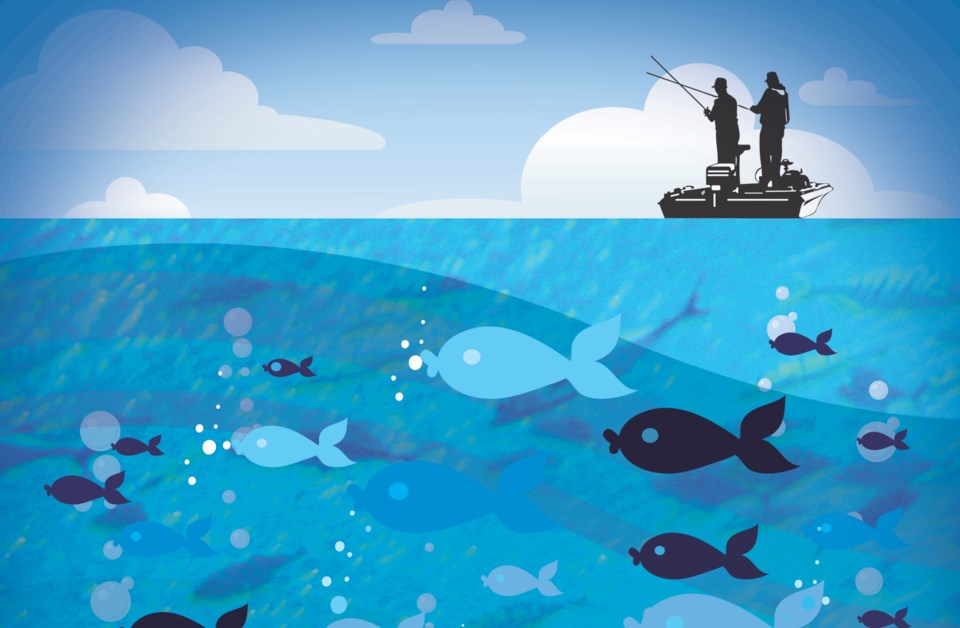 MOOSE LAKE – Grey skies and relatively calm waters seem to have agreed with Moose Lake’s walleye population, because although catch weights were down substantially from the 2019 whoppers, the fish definitely were biting for most of the 91 teams that competed in the Elk Point and District Lions Club’s annual Moose Lake Walleye Classic this past weekend.
Friday’s biggest fish was landed by the team of Derrick Germain and Shane Koss, but it was the team of Brian Oestreicher and Kalynn Gillespie who recorded the day’s top catch in both the Mixed and Senior divisions, while Billy and Laken Fleming led the Youth division. The Fleming duo repeated their win on Saturday, and went on to win the Youth division title with a total two-day catch of an even 49 pounds.
Eric Filewich and Ryan Domino brought in the biggest fish on Saturday, but Oestreicher and Gillespie had the biggest catch in the Mixed division for the second day, their two day total of 52.1 pounds earning them this year’s overall Mixed Team award, and placed seventh overall for the two days.
Last year’s third place team of Blaine Hansen and Terry Mandziuk weren’t in the money on Friday, but picked up the pace on Saturday and recorded notonly the top Senior Team weight for the day, but also took home the prize for the top Senior Team overall, with a total catch of 56.4 pounds.
Other teams in the top 10 were Curtis Beniuk and Kevin Zatorski, second with 55.2 pounds; Bob Senko and Stan Worms, third with 53.7 pounds; Derrick Germain and Shane Koss fourth with 52.9 pounds; Jeremy Manning and Dylan Filewich fifth with 52.6 pounds; Tyrell Mooney and Steve Taylor sixth with 53.4 pounds; Ron Fiske and Mark Filewich eighth with 51.9 pounds; Claude Gamache and Brandon Gamache ninth with 51.6 pounds; and 2019 champions Kevin Schafer and Chris Kindraka 10th with an even 51 pounds, a drop of 18.73 pounds from last year’s winning total.
This was the second year the tournament catches were measured and photographed instead of being hauled off to a weigh boat. This year’s event also experienced other changes from the usual format due to the COVID-19, but attendance was up as fishing enthusiasts proved eager to enjoy the thrill of the annual competition.

Premier makes funding announcements for Lakeland communities during two-day visit
Aug 7, 2020 10:34 PM
Comments
We welcome your feedback and encourage you to share your thoughts. We ask that you be respectful of others and their points of view, refrain from personal attacks and stay on topic. To learn about our commenting policies and how we moderate, please read our Community Guidelines.